This Lent: Give it up for the Earth 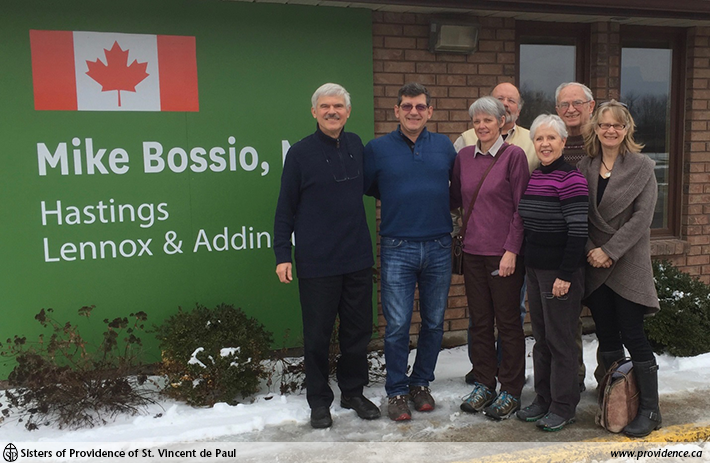 The day before this photo was taken with Liberal MP for Hastings-Lennox and Addington, Mike Bossio, US President Donald Trump signed executive orders to allow construction of Keystone XL oil pipelines which could carry more than 800,000 barrels of Alberta oil a day to refineries in Texas.

Prime Minister Justin Trudeau applauded this decision stating that he had always supported the pipelines as they would “get our resources to market more safely and responsibly while meeting our climate change goals.” (Globe and Mail Jan 24, 2017)

The Anglican Green Group and I had previously made arrangements to meet with MP Bossio to discuss climate change and ask how the party’s election promise of establishing a “pan-Canadian framework for combating climate change” was progressing. President Trump’s decision gave us lots to talk about.

How exactly would mechanisms that expand the Tar Sands help move Canada’s transition to a fossil fuel free economy? Unfortunately the answer to this question did not include rescinding the support for the pipelines. So how can Canada meet its Paris Agreement commitment and limit global warming to 1.5˚C?

The truth is, without our voices and engagement our political leaders will continue to offer more talk than action. So let them hear from us! Let’s speak up for the Creation and support the Citizens for Public Justice campaign Give it up for the Earth! from March 1 to April 13.

CPJ post cards calling for a more far-reaching national climate policy will be found in the narthex during the season of Lent.

I also encourage you to register your pledge at https://cpj.ca/for-the-earth and to take a Creation-centred twist to a Lenten tradition, and give up something that is good for the Earth. Could it be meat, not driving one day of the week or not shopping for one month? The decision is yours!

Bridget Doherty is a member of the Providence Justice Peace and Integrity of Creation team.