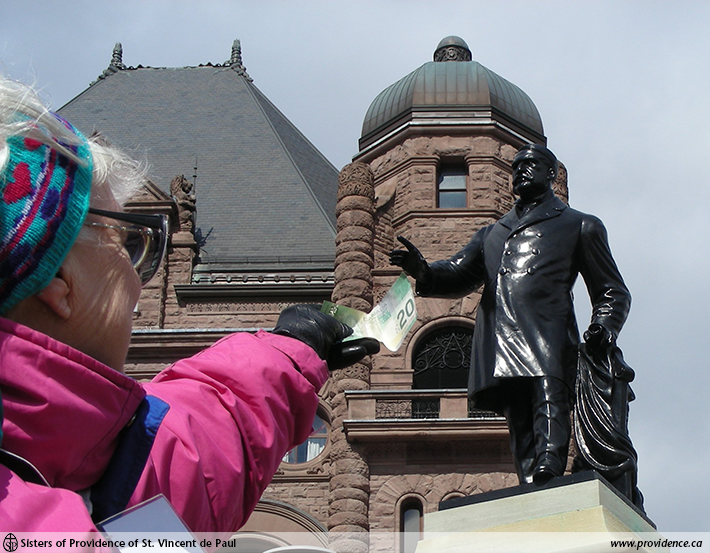 Sr. Pauline Lally attends a pre-budget vigil at Queen’s Park in March. The vigil was organized by the JPIC office.

On May 6 Ontario’s Legislature unanimously passed the Poverty Reduction Act. It was one more step forward for 25 in 5 Network for Poverty Reduction, a social justice coalition that has been lobbying for two years.

The new law requires Ontario to set a new poverty reduction target and plan of action at least every five years, and to consult regularly on its progress with low income people.

“As a result of tremendous community effort and the willingness of all parties to listen, important amendments have been made to the Poverty Reduction Act,” said Greg deGroot-Maggetti, of the Mennonite Central Committee.

“This legislation gives the people of Ontario a powerful tool to hold both current and future governments’ feet to the fire when it comes to reducing poverty.”

The Justice, Peace and Integrity of Creation Office has played an important role in the 25 in 5 Network. On April 20 Sister Pauline Lally traveled to Toronto in April to urge the Standing Committee on Social Policy to strengthen the Act.

“A society is judged by how it treats it most vulnerable,” Sister reminded the politicians.

“We are only as strong as our weakest link.”

In March the JPIC office organized a bus trip to the Legislature to participate in a pre-budget vigil. But the April trip allowed for a more detailed intervention.

“Sister Lally’s presentation was just the absolute highlight of the two days of hearings,” said Network social policy expert John Stapleton. “It is as close to the Gettysburg Address on poverty as I have ever seen.”