A living wage for Kingston? 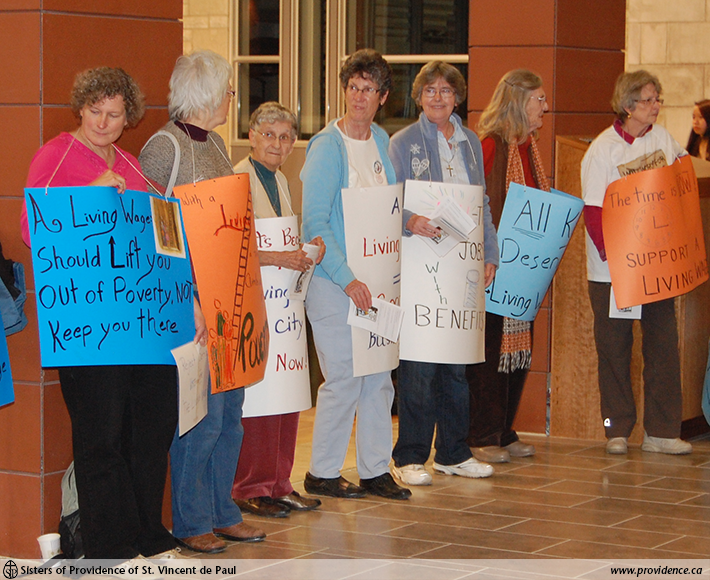 This spring is seeing a resurgence of action to keep attention on a living wage for Kingston. It is a focus of the Justice, Peace and Integrity of Creation office and a whole raft of allies.

In the fall, Kingston city councillor Bill Glover had tabled a motion to request a staff report on the feasibility of a living wage for Kingston. The motion also directed city staff to explore the implications of setting the living wage as the eligibility threshold for City of Kingston subsidized programs, such as recreation and transit.

While City Council didn’t get to Glover’s living wage motion in November, it did pass at December’s meeting. A report from city staff is expected in September 2013.

The idea for implementing a Kingston living wage originated in March 2007 with Mayor Harvey Rosen’s Task Force on Poverty Reduction. Kingston’s Poverty Roundtable then explored the concept over the next three years and published its findings in a 2011 report, A Living Wage for Kingston, written in consultation with the Canadian Centre for Policy Alternatives (CCPA). When the Poverty Roundtable dissolved in December 2011, Living Wage Kingston took over the campaign.
Calculated in 2011 at $16.29 an hour, the living wage is the rate of pay that provides a Kingston family of four with enough income to cover basic needs. Unlike the provincially-set minimum wage, it is based on the actual costs of necessities in Kingston, such as food, child care, transportation, rental housing, and so on. It does not allow for retirement savings, home ownership, or savings for children’s post-secondary education.

In March, a number of events were held to support Living Wage Kingston’s campaign. Michael McCarthy Flynn from British Columbia’s A Living Wage for Families, and Tom Cooper from Hamilton’s Roundtable on Poverty Reduction, came to Kingston. They were guests on a half-hour TVCogeco program and at a public discussion of a living wage for Kingston. On May 13, at Crossroads United Church, Councillor Glover will host a discussion with Senator Art Eggleton and, in June, CCPA economist Armine Yalnizyan will square off against councillor and economist Bryan Paterson in a TVCogeco debate on the living wage. Stay tuned for updates.