A whole new take on local, when it comes to food 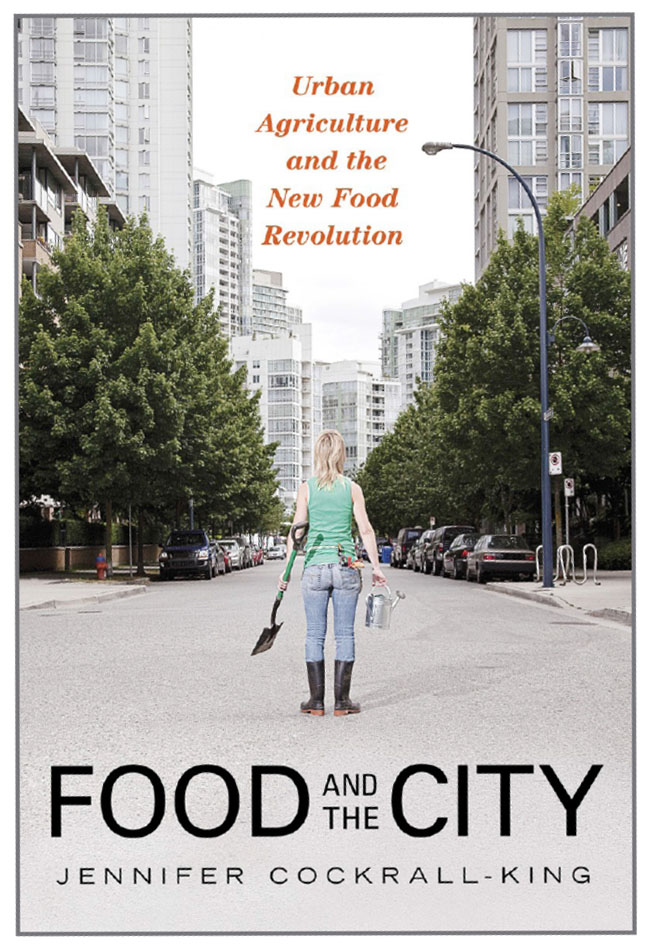 From Toronto to Vancouver, Chicago to California, Seoul, South Korea to Havana, Cuba and points in between, Jennifer Cockrall-King explores the future of food in Food and the City: Urban Agriculture and the New Food Revolution (Prometheus Books, 2012).

Speaking to an appreciative crowd at Writers’ Fest in Kingston this fall, the Edmonton-based writer used glorious photographs to demonstrate how food can be found growing in cities in surprising places and ways. Urban landscapes across the world contain lush community gardens and vibrant farmers’ markets; vegetable-laden patios, balconies, and rooftops; dumpsters and shipping containers overflowing with root vegetables; urban forests of nut and fruit trees; backyard chickens, urban wine crops, bee hives, and inner-city flocks of goats and sheep.

Cockrall-King began with shocking statistics – we throw away 50% of the food we produce; factory food travels an average of 2400 kilometres from field to fork; in the United States, 70% of all antibiotics are used not for human health but for industrially-produced meat. Those stats let the author create a contrast through an account of 19th-century Paris. There, horse manure nurtured 8500 urban gardens making up a sixth of the city’s land to produce as many as six crops per year. That fed not only Paris but also many European cities as well.

The arrival of railroads and refrigeration moved food production out to the country, and it’s only very recently that urban agriculture returned to Paris. Cockrall-King noted that in 2014, 100 community gardens existed in the city.

Recounting her travels around the globe, Cockrall-King spoke of industrial warehouses turned into fish farms and hydroponic vegetable production in Chicago, “spin farming” that can yield 13 crops a year on half an acre of land in Kelowna, B.C., abandoned rail yards and parking lots in Vancouver transformed into orchards and gardens. In Seoul, where 80% of the population lives in concrete apartments and alienation from nature caused a high suicide rate, the city is now full of roof top gardens, municipal parks that allow food production, and green belts dedicated to large-scale urban farms.

Hugely inspiring and passionately delivered, Cockrall-King’s presentation evoked a future in which we who live in cities will grow and raise enough fresh, healthy food to feed one another and liberate ourselves from the industrial food system. Watch for her next book: stories of seed savers from around the world.