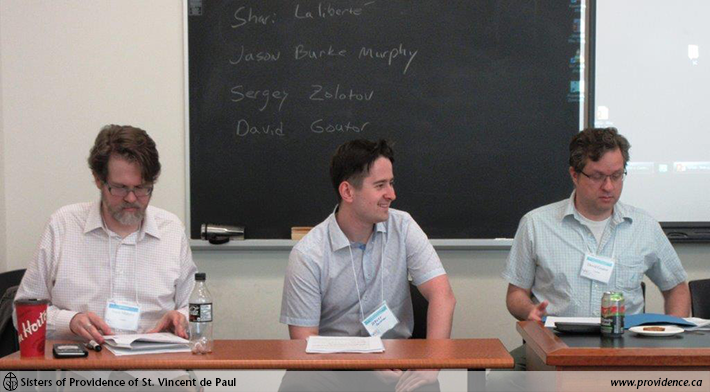 The 17th Annual North American Basic Income Guarantee (NABIG) Congress was held this year in Hamilton from May 24 to May 27. The assembly, jointly-sponsored by the Basic Income Canada Network (BICN), USBIG, the Hamilton Roundtable for Poverty Reduction, and McMaster University, engaged participants from around the world. Speakers from Canada, Mexico, Brazil, Chile, Portugal, Belgium, Germany, Russia, Australia, and the United States gathered to consider the bold ideas and practical solutions of a basic income.

Some of Canada’s public champions – BICN Chair Sheila Regehr, human rights activist Josephine Grey, Senator Art Eggleton, Member of Parliament Guy Caron, and Dr. Evelyn Forget, economist, health expert, and researcher of the world’s most famous basic income experiment  Mincome, undertaken in 1970s Manitoba, took to the stage to discuss the importance and urgency of implementing a policy that will not only ensure an adequate income but also build a healthy, equitable, and prosperous society for all.

More than 30 presentations and workshops, along with the premiere screenings of two documentary films, covered the many paths leading to a basic income as well as the various means by which basic income (BI) can become a reality. The three-day gathering covered BI-related topics including democracy, human rights, robotics, cryptocurrency, poverty, and health together with the practicalities of implementing a basic income through pilots, policy, and public support. Should a basic income be a universal benefit or targeted to those who need it? Should it be implemented incrementally or all at once? Will BI lead to freeloaders taking advantage of the system, or will a basic income be our only means of preventing civil unrest in a jobless society where human workers are replaced by machines?  How do we build political support, and how will we pay for it? Can people with diverse views but agreement about a common goal work together to build a movement championing basic income? These were just some of the many questions posed during the conference.

A grassroots’ community presence distinguished Hamilton’s NABIG from all that came before it. For the first time community advocates and those with lived experience made a contribution equal to the theorists and academics at NABIG and played a central role in the discussion of a basic income guarantee. Seven members of Living Proof, a group of individuals from Hamilton participating in Ontario’s Basic Income Pilot, were there to share their personal stories about life on BI. Previously struggling to survive on disability pensions, Ontario Works, or low-wage jobs, all testified that basic income has given them hope and transformed their lives. From securing housing, purchasing eye glasses and healthier food to having the breathing room to seek a better job, return to school, spend time with their children or volunteer, they attested that basic income has provided the safety net they needed to move forward in their lives. They experience less social isolation, stress, stigma, and anxiety, have more compassion for others, and feel they are making a worthwhile contribution to society.  “It’s not theoretical to us, it’s our lives,” one said. “We need to be leading the fight for a basic income.”