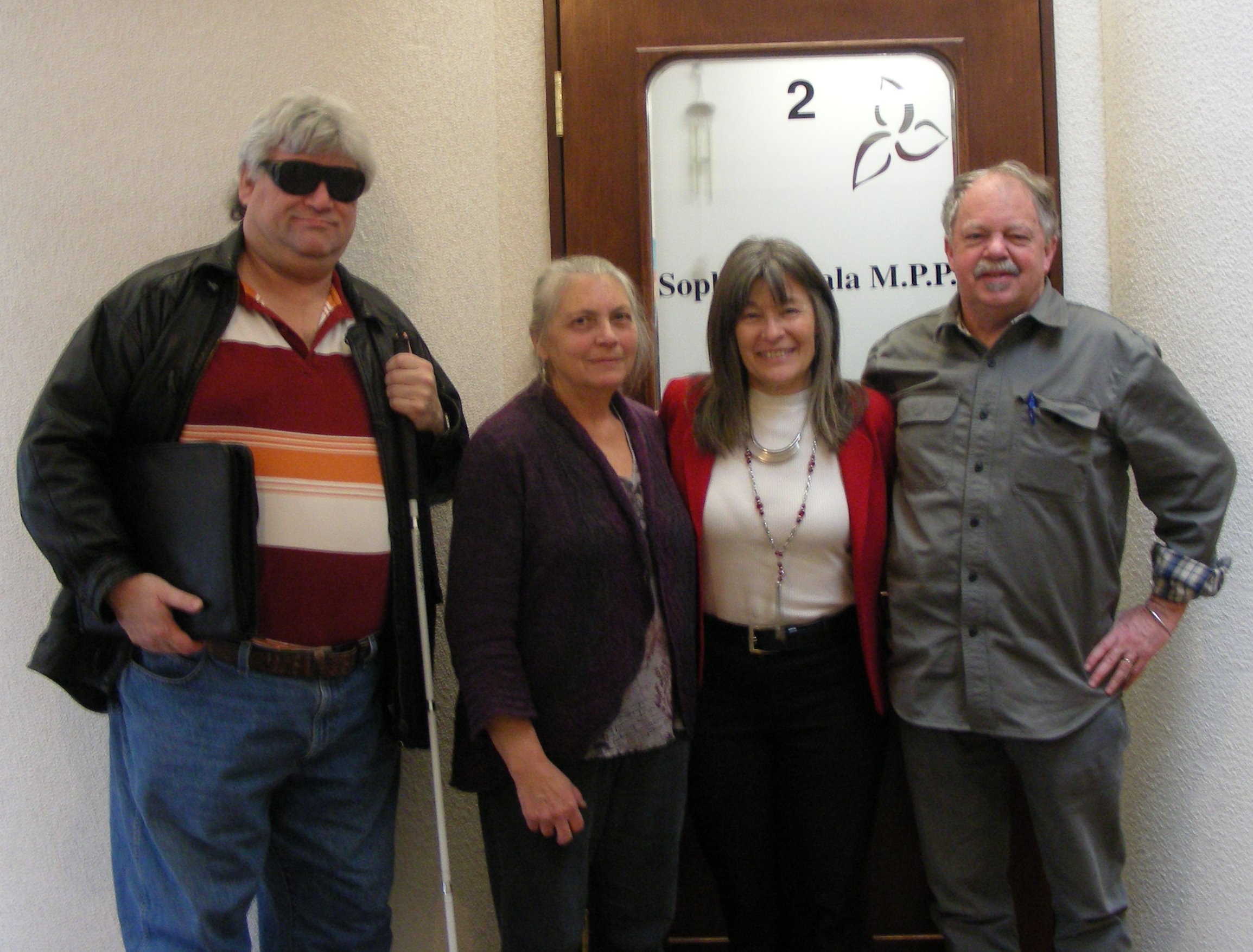 Jamie Swift and Tara Kainer from the JPIC Office of the Sisters of Providence along with Cam Jay, Kingston anti-poverty activist, visited MPP Sophie Kiwala on December 12, about the Billion or Bust Campaign. This is a campaign of the Interfaith Social Assistance Coalition to add significant money into social assitance in the 2017 provincial budget.

We left ISARC’s page of policy requests, background information, and a list of current social assistance rates with her.  We also pointed out that there are several drives going on simultaneously to bring attention to the inadequacy of income for many Ontarians, illustrating the general concern about income insecurity.

Ms. Kiwala was unaware of this particular campaign, although she knows about facets of it i.e. efforts to increase social assistance rates and also to raise the minimum wage. She is also aware of the basic income campaign and Bill 6, and recently attended a Community Foundation luncheon in Kingston featuring local Basic Income Guarantee advocate, Toni Pickard, former Senator Hugh Segal,  advisor to the government about its Ontario basic income pilot, and George Thomson, former provincial court judge appointed to lead the working group on income security reform. Jamie, who also attended the luncheon, emphasized that Hugh Segal noted that all parties have agreed to see the basic income pilot through to the end.

Struggling on a CPP-disability pension himself, Cam spoke about the challenges people on Ontario disability pensions face. In addition to insufficient income, the bureaucracy is difficult to navigate and makes people feel unfairly scrutinized, particularly if they live with mental illness. The system also makes them feel precarious and uncertain as they perceive they could do something ‘wrong’ at any moment and lose their benefits. Cam pointed out as well that, in Kingston, there is no middle class left – virtually half of the population lives on less than $30,000 a year — and that people at the low end are being squeezed the most.

We know from other dealings with her that Ms. Kiwala once ran a business and paid her employees $15/hr., long before the recent Fight for $15 and Fairness campaign and that she pays attention to poverty issues. Yesterday she told us that she got into politics in the first place because she saw people having challenges making ends meet. She also said that Ontario has issued progressive budgets in recent years. She agrees, however, that the Liberals have more work to do and more needs to be done. She also assured us that there is general concern and that “You can rely on me to do everything I can.”

We requested that Ms. Kiwala forward ISARC’s demands to caucus and also to the Minister of Community and Social Services and to respond to us in writing about any developments or changes. She suggested that we write a letter instead to Minister Jaczek, cc her, and she will inform us about any progress. That letter will be mailed tomorrow.

We also left several pages of petitions calling for a $15/hr. minimum wage.