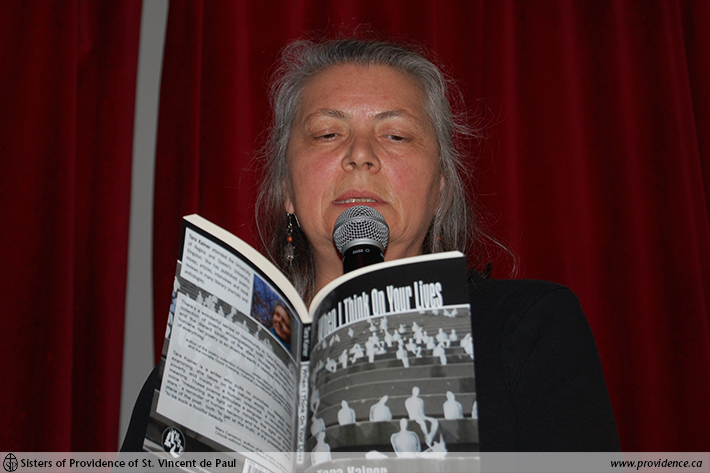 Justice, Peace and Integrity of Creation staff member Tara Kainer’s first book of poetry was published in 2011 by Hidden Brook Press. She read this poem at the Put Food in the Budget inquiry into poverty in Ontario in September.

Poverty, Mahatma Gandhi said,
is the worst form of violence.
Not many get that. She didn’t either
until tight in its grip her world shrunk
to this tiny, dark box where she’s crushed
together with her two small children,
everywhichway she turns, there
is something to block her; every
time she raises herself up, someone
is there to knock her back down. She
remembers the first time she wanted
to slap her toddler hard: he reached
for the milk and tipped it over, all
they had left until the next cheque day;
Nothing to do but cry over spilt milk,
huddled together she wailed and he howled,
heads hanging, two blue figures in a fixed
landscape, her stomach turning at the thought
of going to the food bank or drop-in for more;
she can’t face their questions, that look —
pity or condemnation —both
cause her hands to sweat, a
collapsing of her innards, the loss
of her voice. In the beginning
she expected kindness, actually waited
for a call: Are your kids okay? they’d ask.
How are you coping? They’d acknowledge
what she was going through instead of justifying
their own impotence by pointing a finger at her,
recognize who she is, not equate her
with her diminished circumstances.

Now she tries never to expect
or ask for anything—
it betrays a weakness and a cause for blame, like
that time she went to welfare with a black eye
and the worker told her if she couldn’t protect
herself she couldn’t protect her children and
he was obliged to notify the authorities
who could. She turned right around
and walked out, even though
she needed help, her ex had punched holes
in all her apartment walls, rifled through
her purse and took what cash she had.

That’s when she shut herself and her kids
up in their cramped, hot apartment, put
the old bicycle locks on the cupboard
and fridge doors so her older boy
wouldn’t eat the little food that was left.
Even when he cried, But I’m hungry,
mummy, she told him to wait for his supper,
sat still and cold as stone, calculating
how long the food would last if she ate less,
if she went without, wondering how
she got this way, how long
she could manage, when it happened
that she lost herself irrevocably…
Once upon a time
she had inhabited a vast open landscape:
she remembers colour and motion,
whispers and radiant light,
an inner world like a mighty forest
or an endless sea