Do the Math Challenge 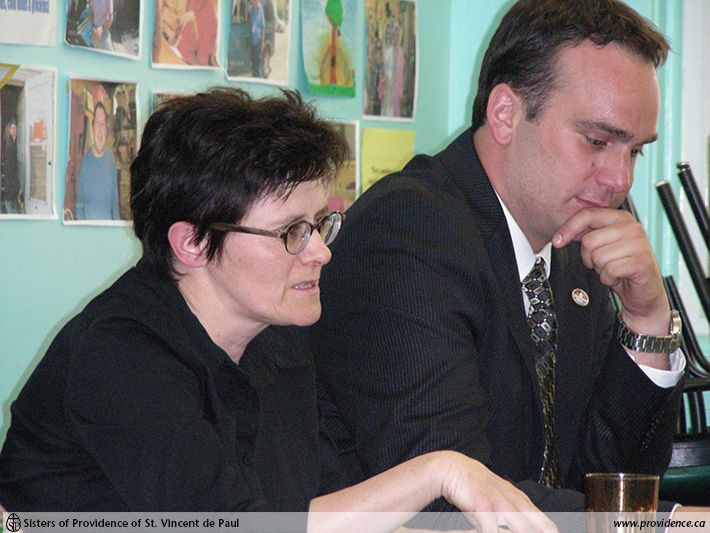 “I have a fire in my belly,” Elaine Power, Queen’s Professor of Health & Kinesiology, explained during a wrap-up panel of Do the Math Challenge participants on May 26th at St. Vincent de Paul Society in front of an audience of about 30 people. The event was co-sponsored by the Food Providers’ Networking Group and the Kingston Community Roundtable for Poverty Reduction.

While she has worked in the field of food security and health for the past 15 years, Professor Power said only after eating for three days, of the food Ontario’s most vulnerable typically must rely on to survive, did she truly understand the reality of those she studies. “Now I feel it in my bones and blood and belly,” she said. “And I need to do something to satisfy my rage.”

The Challenge is Phase II of Put Food in the Budget (PFIB), a province-wide campaign launched in 2009 by Social Planning Councils of Ontario and Toronto’s The Stop: Community Food Centre to address the chronic inadequacy of Ontario Works and Ontario Disability incomes. It invites participants to live on a food bank diet from three days to a week and comment publicly on their experiences. While the campaign ultimately strives to raise social assistance rates to levels based on the actual cost of living, as an interim measure PFIB proposes that the provincial government implement a healthy food supplement of $100/month for all Ontarians living on social assistance.

Phase I of the campaign was Do the Math, an on-line survey asking the public and all MPPs in Ontario to put themselves in the shoes of a single person receiving assistance and to estimate the cost of their rent, food, transportation, toiletries, etc. On average the gap between what Ontario Works recipients get, a maximum of $592/month and what participants perceive they need, is $965, for a total of $1557/month.

Participants present expressed varying degrees of outrage, frustration and dismay about the indignity Ontario’s poor suffer in the face of government inaction and societal complacency. Commenting about the nutritional content of emergency food being clearly inadequate, Mayor Gerretsen said, “We need to adhere to a higher standard for quality and get all three levels of government to take action.”

Elizabeth Barton noted that the lack of nutrients in the food left her feeling shaky, exhausted, dull, and ill. “Food, along with clean water, equal access to health care, housing and child care are fundamental rights we need to uphold,” she argued.

Susan Belyea spoke about the inability of charity to ever meet the desperate need. “By the time a can of soup gets through the food bank system and into the hands of a recipient, the cost of that can is about $20. We need to stop targeting the poor and provide universal solutions that work for everybody. Public libraries are a good model to follow.”

When asked by the moderator what would mitigate her anger, Professor Power offered a universal minimum income such as that proposed by Senator Hugh Segal as a means of eliminating social services and eradicating poverty. “That would satisfy my rage, she concluded.