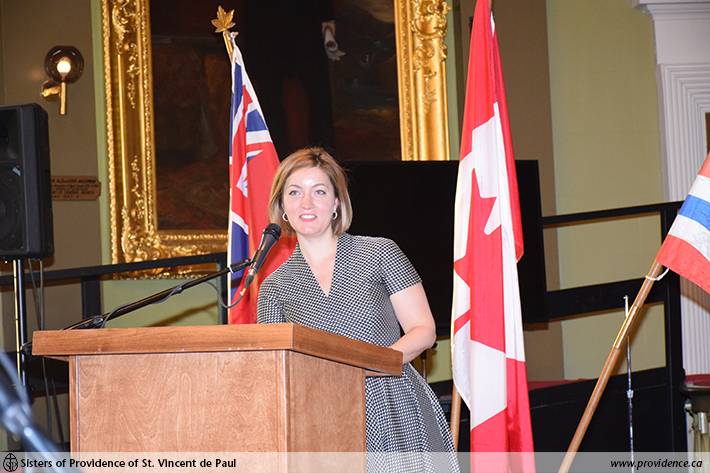 Dr. Danielle Martin in Kingston, May 2015

A virus. One of those nasty bugs that’s hard to shake, immune to antibiotics. Sometimes a virus can spread like a forest fire, as often happens during flu season. Not surprisingly, viral infections are of considerable concern to doctors and other health care providers.

But the idea of “viral” has taken on new meaning since the turn of the century. People want their on-line videos to “go viral.” It means their ideas could get, well, infectious.

This happened to a surprised Toronto family doctor last year when her testimony to a US Senate committee on health went viral. Dr. Danielle Martin is Vice President for Medical Affairs and Health System Solutions at Women’s College Hospital. Using a firm grasp of the evidence, Dr. Martin coolly showed that Republican Senator Richard Burr’s questions about Canada’s public health system were based on half-truths and misconceptions.

As the Los Angeles Times put it, she “batted down the myths and misunderstandings about the Canadian system that Burr (threw) at her.”

Danielle Martin has become a prominent booster of important proposals to improve Canadian health and health care. Her ideas would actually save precious health care dollars.

The Sisters of Providence, working with several other local groups including the Queen’s medical school and the Kingston Community Health Centres, invited Dr. Martin to town in May. She presented her proposals for a national pharmacare program and a Basic Income Guarantee to enthusiastic audiences at the medical school and city hall.

She told the story of a woman in her practice who is afflicted by the disease of poverty. On the surface, Leslie is an asthma sufferer who uses multiple puffers and has been forced to take prednisone, a powerful drug with significant side effects. Her illness has cost the system big money.

“She has been seen by multiple specialists and has been in and out of the emergency department dozens of times,” explained Dr. Martin.

Cause of illness: poverty

Leslie’s asthma began with a flood in her social housing unit. Mould grew inside the walls, so her health started to worsen. It took two years of mould photos and letters from her doctors, including Daniele, before her landlord got her another apartment. The waiting proved catastrophic.

“Her physical and mental health deteriorated. She became depressed. Her relationship fell apart. She wasn’t able to hold down a steady job. She gained weight and her blood pressure worsened because she couldn’t exercise due to her breathing problems.”

Leslie’s illness was caused by her poverty. Attacking poverty through as Basic Income policy to bring all Canadians up to a decent standard of living, urged Dr. Martin, “would do more to improve health than any single other policy our government could promote.”

“Decades of studies have demonstrated that, as important as health care is, it doesn’t play the primary role in determining whether people will be ill or well. Social factors, like those that led to Leslie’s illness, have a much more powerful impact on the most meaningful outcomes.”

Dr. Martin pointed to the social justice vigil that has been held for some 20 years outside the building where she was speaking.

“The Sisters of Providence have held a social justice vigil right here in front of City Hall to raise awareness about local poverty.”

Moving from charity to justice

Most of the 200 people in the audience know about the vigil. Many had received the little vigil handout explaining that each month Kingston’s faith communities provide thousands of meals for people who cannot afford enough to eat.

“No doubt this is important, righteous work,” said Dr. Martin. “But as the Sisters themselves point out, shouldn’t all people in Kingston – and across our country – have incomes allowing them to be self-sufficient? Charity is important, but fairness – justice – is what we should demand.”

That’s why the Sisters’ Justice Peace and Integrity of Creation office has been actively working with Kingston’s Basic Income Action Group, another sponsor of Dr. Martin’s Kingston visit.

“Basic Income is very much like Medicare, or any insurance policy,” said Dr. Martin in summing up her proposal. “We all pay in. We all hope we won’t have to use it. But if we do, there isn’t a humiliating process of having to prove our worthiness in order to have our medical bills covered or put food on the table for our kids.”

Sounds like an idea that should be going viral.