This is a shortened version of the article published in Horizons, a publication of Queen’s Department of Family Physicians Global Health Program. Tara Kainer is employed in the Justice, Peace & Integrity of Creation Office of the Sisters of Providence of St. Vincent de Paul and a member of Kingston’s Task Force on Housing. 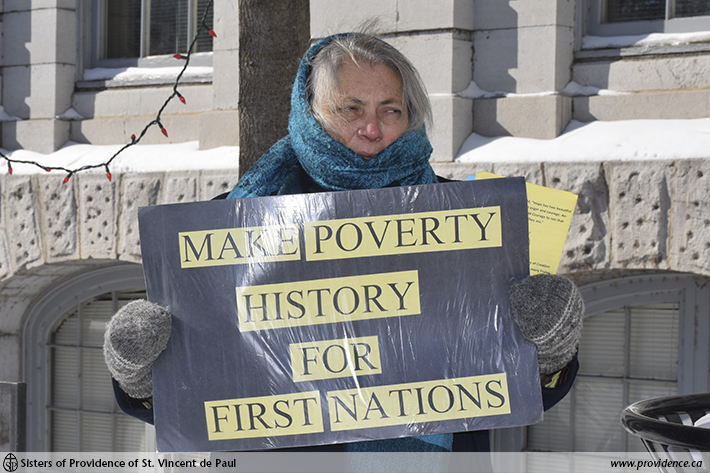 Tara Kainer during one of the weekly Friday Vigils held by the JPIC ministry of the Sisters of Providence of St. Vincent de Paul until 2015.

From The Tyee to The National Post, Globe & Mail, Huffington Post and The Star, journalists describe the housing situation in Canada as a “crisis”. Foreign investment, speculation, low-interest rates, inadequate supply, and higher construction costs have all led to a dramatic spike in the cost of housing, leaving even those who earn reasonably good incomes struggling to afford home ownership or rentals. In Kingston, the affordability crisis is acute. At 0.6% the vacancy rate is the lowest in Ontario, 48% of renter households spend 30% or more of their income on housing, and a tenant needs to earn an hourly wage of $23 to rent a two-bedroom apartment in a province that has frozen the minimum wage at $14 an hour.

Add climate change, described by the Centre for American Progress (“A Perfect Storm”, August 1, 2019) as “an affordability housing crisis multiplier” into the mix, and the situation worsens, particularly for our most vulnerable citizens. For them, the combination of the high cost of living and the lack of affordable housing exacerbate the impacts of extreme weather events.

At play are not only the devastating effects of climate disasters including flooding, hurricanes, wildfires, severe cold, heat waves and ice storms, which are increasing in frequency and severity, but also rising inequality. With the concentration of income and wealth among Canada’s top  20%, who own about 67% of our total wealth, while the bottom 20% of households own less than 1%, we have a wealth gap which Oxfam calls “obscene” (Public Good or Private Wealth, January 2019).

Globally, the wealth gap is preposterous. According to a report published by Oxfam in January 2017 to mark the annual meeting of political and business leaders in Davos, Switzerland, “Eight men own the same wealth as the 3.6 billion people who make up the poorest half of humanity”. This inequity penetrates to those most likely to experience the worst and first climate impacts: low-income communities and those experiencing homelessness.

Unlike many homeowners and those of affluent means, the disadvantaged lack housing that is stable, affordable and as able to withstand disastrous events. They are more likely to live in isolated and under-resourced neighbourhoods with poor environmental conditions and shoddy infrastructure.  While the hurricane rages or wildfires spread and officials issue directions to stay inside or leave town to avoid smoke, or retreat to roofs to escape flooding, those without homes and vehicles have few if any options.

As bad as the consequences of the extreme weather event itself might be, the aftermath is worse. Hurricanes, Katrina in New Orleans, Maria in Puerto Rico, and most recently Dorian in the Bahamas, illustrate how those displaced or experiencing homelessness desperately scramble to find shelter while inequities in disaster response systems favour wealthier households and nations. Those displaced by extreme weather – which globally numbered a record 7 million in the first half of 2019 (The New York Times, September 12, 2019) are likely to be cut off from basic needs including clean water, electricity and food.  They may lack access to transportation, telecommunications, and medical aid.  Rents skyrocket due to the sudden supply shortage of housing and damaged affordable housing stock is more often demolished than rebuilt, forcing the homeless to seek shelter in shattered homes, makeshift tents, and structures unfit for human habitation.  People already disadvantaged are most likely to die in a disaster or live to suffer the consequences of physical and mental illnesses including West Nile virus, cholera, post-traumatic stress disorder, anxiety and depression.

The reality that some people will feel the effects and health impacts of a changing climate more than others, causing perhaps the most significant threat to democracy and public health this century will experience, prompted Philip Alston, the United Nation’s special rapporteur on extreme poverty and human rights to coin a term: climate apartheid. He has warned that climate change “threatens to undo the last 50 years of development, global health, and poverty reduction”, leading to a new era where “an over-reliance on the private sector “ could enable “the wealthy to pay to escape overheating, hunger and conflict while the rest of the world is left to suffer” (UN News, June 25, 2019).

Alston predicts that unless we take immediate action, by 2030 climate change will push an additional 120 million people worldwide into poverty, food insecurity, forced migration, disease and death. “Perversely”, while the 3.5 billion people living in poverty are responsible for just 10% of greenhouse gas emissions compared to the richest 10% being responsible for half, the world’s poorest will bear the brunt of climate change and have the least capacity to protect themselves.
The remedy for climate apartheid, UN rapporteur Alston argues, is to make “deep structural changes in the world economy”, to “decouple from fossil fuel production” and transition to a green, sustainable economy, while providing a fair and stable safety net for workers who temporarily lose their jobs in the interim —  policies which the Green New Deal and basic income address. “A robust social safety net will be the best response to the unavoidable harms that climate change will bring”, he reasons (UN Report).

In countries as affluent as Canada, climate apartheid manifests itself more often, although not always, as climate gentrification instead. The term refers to those who have the means to retreat from floods, storms, heat waves, wildfires and other climate vulnerabilities and move to safer areas,” bringing soaring property and rental values with them” (Oliver Milman, The Guardian, September 25, 2018).  A pattern of climate gentrification is taking hold across the United States, Milman notes, with Flagstaff, Arizona, for example, being inundated by climate refugees. “We don’t mind people moving to Flagstaff at all”, says Coral Evans, Flagstaff’s mayor. “But about 25% of our housing is now second homes. The cost of living is our number one issue.  We don’t talk much about what climate change means for social justice. But where are low-income people going to live? How can they afford to stay in this city?” (Coral Evans, quoted by Milman)

Research makes clear that climate vulnerabilities compound already existing inequalities that compromise public health. Local policy makers who implement progressive and equitable housing policies which invest in resilient infrastructure and strengthened building codes will help to protect the supply of affordable housing as well as public health and well-being in the face of extreme weather. 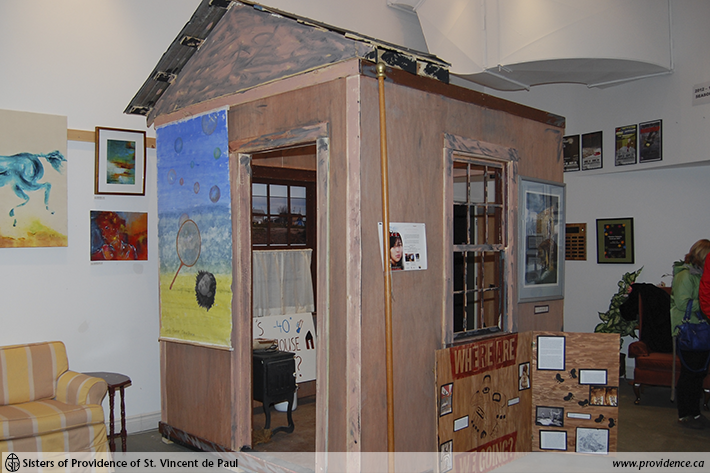 Housing in First Nations communities on display for a 2012 screening of “3rd World Canada” documentary by Andrée Cazabon at the Domino Theatre, Kingston, Ontario.