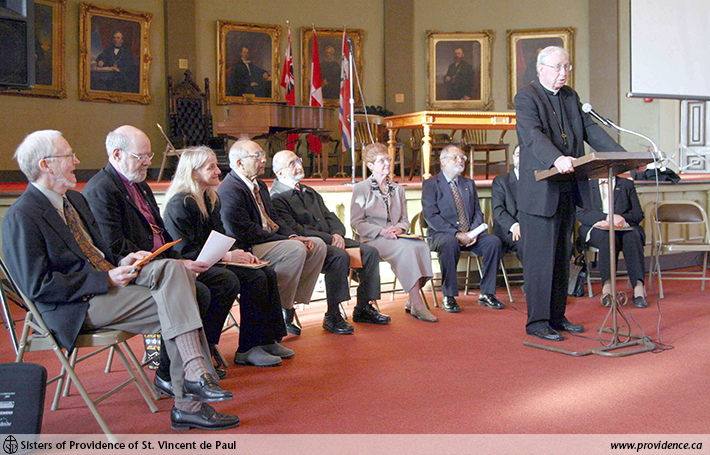 A sizeable crowd showed up to Memorial Hall on May 24th to take part in an Inter-Faith Gathering to discuss Religious Faiths and the Poor: Call and Response.

Those who have faith and do righteous deeds, – they are the best of creatures. Qur’an, 98:7

A sizeable crowd showed up to Memorial Hall on May 24th to take part in an Inter-Faith Gathering to discuss Religious Faiths and the Poor: Call and Response. Sponsored by Kingston’s religious leaders, the gathering engaged representatives from various faiths to share concerns about poverty and to discuss the challenges of caring for society’s most vulnerable citizens.

Introducing the event, Archbishop Anthony Meagher described similar gatherings he’d attended in Toronto and Kingston. What moved him, he told the crowd, was how similarly all faiths responded. This was borne out by the speakers who followed.

Diane Mensch explained that, for the Baha’i, economic problems need spiritual solutions. Unitarian Elaine Harvey said that addressing the plight of the poor requires action as well as compassion. Anglican Bishop George Bruce described Jesus as “a homeless refugee” who challenged his followers to care for the sick, the weak, and the imprisoned.

Christians, Sister of Providence Sheila Langton explained, declare a preferential option for the poor and embrace the mission of bringing justice and peace to all. “Justice work is more complex than opening a wallet,” she said, and “we’ll succeed if we love one another, as Jesus loved us,” she concluded.

Speakers representing the Hindu, Islamic, Sikh, and Jewish faiths also identified common principles and strategies in their approach to poverty: How well or how badly we treat a person suffering from hunger and thirst is a test of our faith. Because everything belongs to God, withholding wealth from the poor amounts to stealing what is rightfully theirs. Share your good fortune with those who are less fortunate. Quoting Mohammed “he who sleeps with a full stomach while his neighbour is hungry is not a true believer” Dr. Moustafa Fahmy emphasized the importance of being sensitive and responsive to the needs of others.

By the close of the evening, all of us “from whatever faith or denomination” could agree with Rabbi Daniel Elkin, “We are making the world a better place by giving.”