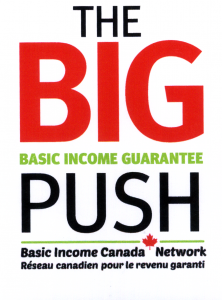 The world’s richest man is a chubby sort of chap by the name of Slim.

If he spent his money at the rate of a million dollars a day, it would take Mexican tycoon Carlos Slim 220 years to spend his $80-billion fortune. In January, an Oxfam report revealed that the world’s 85 top billionaires had the same wealth as the poorest half of the world’s people.

The international charity also pointed out that at least a million women have died in childbirth due to a lack of basic health services since 2009.

One way of addressing the savage inequalities that threaten society here in Canada is the idea of providing every Canadian with a basic income. An income that would be guaranteed, no matter what your circumstances. The campaign, on which Tara Kainer and I have been working, is called The BIG Push. BIG stands for “basic income guarantee.”

The idea has been around for years. Formerly known as a “guaranteed annual income,” this growing social justice effort is an idea whose time has come. Kingston’s energetic BIG group explains that a basic income would be more simple – and cheaper – than welfare. There would be no stigma attached because of its universality. A basic income would compensate people for doing unpaid work like caring for the young, the old and the sick. It has been proven to cut poverty while reducing health care costs.

Kingston’s young BIG group comprises a remarkable group of activists and academics convinced that this common sense proposal fits well with increasing concern about economic insecurity. People worry about where their children or grandchildren will find jobs that pay enough to support their families.  The Justice & Peace Commission (Catholic and Anglican) has endorsed BIG and we intend to build public support through faith communities.

As the federal election approaches, Kingston’s BIG group is organizing a televised all-candidates’ debate on inequality, poverty and BIG. We’re doing it in partnership with TVCogeco. We are also sponsoring a May 13 visit by Dr. Danielle Martin. She is a Toronto physician who is an ardent defender of public health care. She is also an outspoken supporter of a basic income guarantee. We’re not sure what Mr. Slim – or the 30 Canadians who share his billionaire status –  would make of this. We do know that we intend to keeping promoting a fairer Canada.