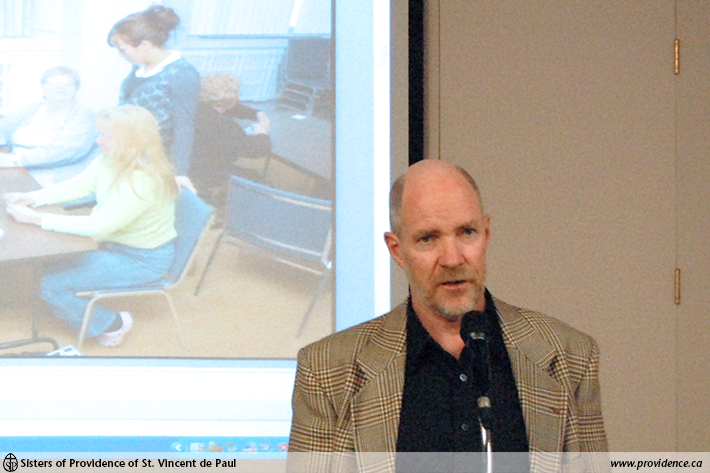 Kingston author Larry Scanlan shares his experiences in his book A Year of Living Generously.

Sister Pauline Lally introduced Kingston author, Larry Scanlan, to a capacity crowd during a book launch on May 19th at Providence Motherhouse.

Saying it must be in the DNA, Sister Pauline compared Larry to his aunt, deceased Sister of Providence Rose Marie Scanlan, who formed the congregation’s first Social Awareness Committee, a precursor to the JPIC office. She acknowledged both Scanlans as passionate promoters of charity and justice.

Larry’s new book, A Year of Living Generously: Dispatches from the Front Lines of Philanthropy, celebrates volunteerism and philanthropy. It also is critical of the grinding poverty allowed to exist around the globe. Author of more than a dozen books, and newspaper journalist, Larry lives in Kingston and spends many days at his log cabin in Prince Edward County.

His latest book is receiving rave reviews. Larry writes about his experience with 12 different non-profit or charitable agencies, including Kingston’s St. Vincent de Paul Society, Collins Bay Penitentiary, a centre for street workers living with HIV/AIDs in Costa Rica, a women’s radio station in Senegal, and the Water-keepers project on the shores of Lake Ontario.