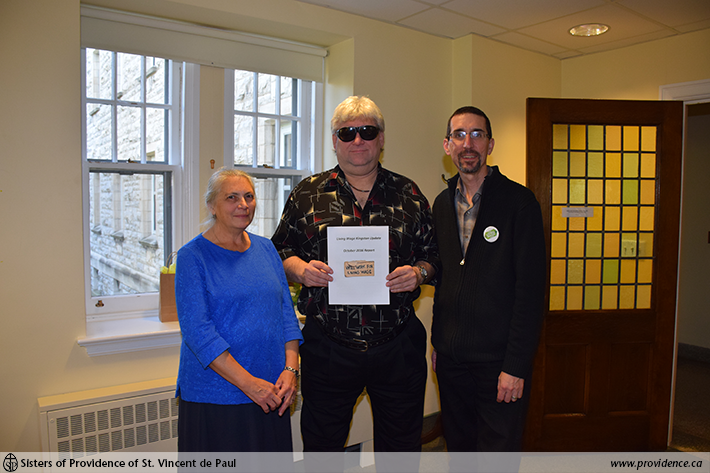 To kick off Living Wage Week, a recalculation of Kingston’s living wage  was released.

Living Wage Kingston announced that the new amount is $16.58. That’s what each partner has to earn to keep a family of four above the poverty line. Originally calculated at $16.29 in 2011, the update reflects cost-of-living changes and Ottawa’s new Canada Child Benefit.

On November 2, the Motherhouse hosted two living wage advocates for a day of media work and talking to potential living wage employers. Greg deGroot-Maggetti, co-chair of Ontario’s Living Wage Network met with Cam Jay, co-chair of Living Wage Kingston, as well as Tara Kainer and Jamie Swift of the Sisters of Providence Justice, Peace and Integrity of Creation office. They discussed approaches to living wage employers. It is thought that many employers already pay a living wage but have not yet claimed the designation. In addition, employers who do not pay a living wage for their region are encouraged to do so.

The Kingston Living Wage was calculated in partnership with the Canadian Centre for Policy Alternatives and the Ontario Living Wage Network. Living Wage week was October 31-November 6.