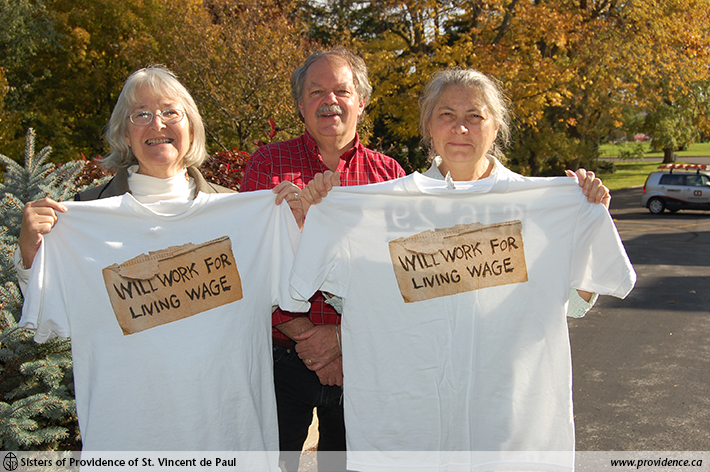 Kingston has a new Living Wage Campaign. We’re joining other Canadian cities where social justice advocates are promoting the simple idea that a job should pay enough to provide a decent standard of living.

The JPIC office is assisting with the local Living Wage effort that emerged from Kingston’s since-disbanded poverty reduction roundtable.

The simple answer: A Living Wage is an hourly rate that provides a family with enough to live on. Not merely to subsist or survive. But to afford everyday expenses. Housing. Decent food. Clothing. Utilities. Child care. A vehicle. Internet access. Health benefits – eyeglasses, prescriptions, dental care. (Kingston’s City Council recently rejected a proposal to invest in improved dental care for the poor.)

Our local Living Wage for 2011 was calculated by the Kingston Community Roundtable on Poverty Reduction at $16.29 per hour for a family of four with children aged four and seven. It has gone up slightly since then. The rate was developed by poverty roundtable volunteers along with economists from the Canadian Centre for Policy Alternatives.

A Living Wage is much higher than the minimum wage. That hourly rate (currently $10.25 per hour and unchanged now for over two years) is set arbitrarily by the government — with no reference to people’s actual needs. Kingston’s living wage campaigners hope to focus on employers like the Sisters of Providence who pay a living wage to their employees, thus providing a positive example to the community.

A Living Wage is good for the community as a whole. Becoming a living wage community would make Kingston a more attractive place for workers and a better place to do business. The alternative, says McMaster University’s Professor Donald Wells, is clear.

“Low pay means less money circulating in the community to buy goods and services from local businesses. Low pay means stressed-out parents taking on multiple low-paying jobs and more hours of work to make ends meet. To do this, they sacrifice time with their children.”

How you can get involved