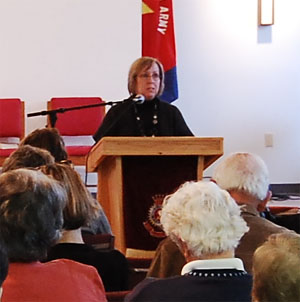 Bonita McCourt of the Salvation Army Community Services speaks during the October luncheon.

In Kingston you can order an $11 poutine with braised veal cheeks. Or lunch on truffled frites with shaved parmesan and aioli.

Or you can visit Vinnie’s, the St. Vincent de Paul Society’s north end lunch program that saw demand for its free meals rise 36% in the first six months of 2008 compared to 2007. Martha’s Table served 37% more meals during this period. The Salvation Army’s Gathering Place served 4028 meals in the first half of 2007, 6518 this year – up 64%.

“Despite the looming economic turbulence, we live in one of the richest places in the world,” said Jamie Swift, Director of the Justice & Peace Office of the Sisters of Providence.

“Persistent poverty amidst such wealth is a moral betrayal of our most vulnerable neighbours.”

The Food Providers Networking Group will not only draw attention to increasing needs in our community; its Turning Up the Heat on Hunger is also part of a province-wide push by the 25-in-5 Network for Poverty Reduction.

The goal is to urge the McGuinty government to follow through on its 2007 election promise to launch a Poverty Reduction Strategy — one with serious financial commitments to affordable housing, liveable incomes for all and comprehensive child care and early learning.

Since the present government took office, its revenues have risen by 40%.

Yet people dealing daily with disability and family dysfunction, illness, isolation, and just plain poverty have not shared in our prosperity. They still depend on charity for meals.

Each Ontario public health unit is required to collect annual data on the minimum cost of a nutritious diet. KFL&A Public Health’s 2008 report Can These People Afford to Eat Well? once again confirms that families on social assistance or earning minimum wage have insufficient money to pay the rent and feed their children an adequate and nutritious diet.

The Food Providers Networking Group continues its mission of poverty reduction in Kingston.

Its “Turning up the Heat on Hunger” is part of a province-wide push. The goal is to urge the McGuinty government to follow through on its 2007 election promise to launch a Poverty Reduction Strategy.

The chart below outlines the real need for change.

Source: Food Providers Networking Group
* Food Bank director Sandy Singers attributed the decrease to making more co-operative living arrangements as a way of getting by. This means that fewer but larger hampers are being distributed.