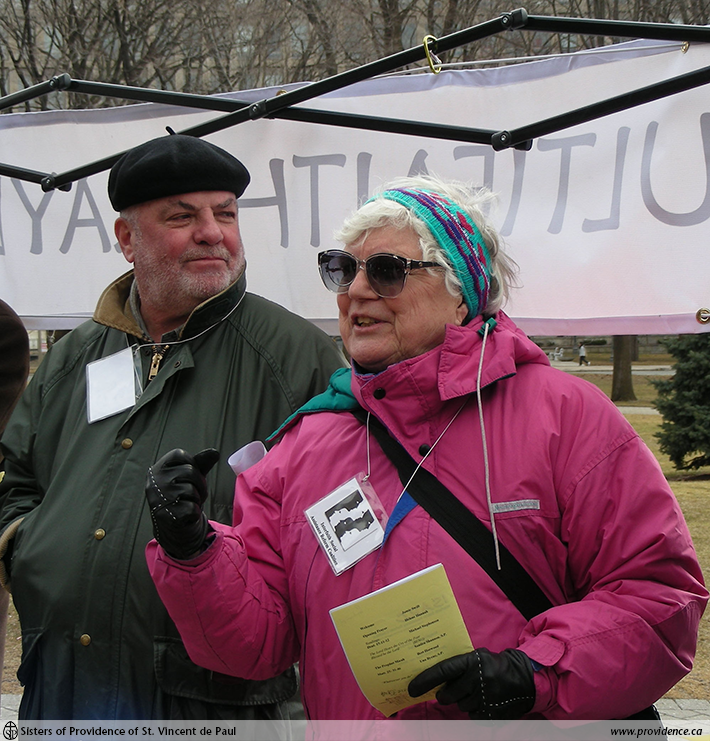 A band of two dozen Kingston vigil keepers and friends traveled by bus to Toronto on March 11. Our goal was to participate in the Interfaith Social Assistance Reform Coalition’s prayer vigil at Queen’s Park.

Ontario’s faith communities prayed for the poor at Queen’s Park during a series of pre-budget vigils outside the provincial legislature in March. Provincial politicians were also be in the prayers of Buddhists, Christians, Hindus, Jews, Muslims and representatives of other faiths during the seven-hour vigils.

It was such a blustery March day that we found ourselves having to shout to make ourselves heard above the sharp snap of the flags in front of the “pink palace.”

Sister Pauline Lally evoked Mahatma Gandhi: “No matter what you do will seem insignificant; but you must do it and be the change you wish to see in the world.”

She also insisted that it all begins with awareness and religious social teaching has long been animated by religious values that transcend charity and individual giving.

With the Provincial seat of government as the backdrop, Sister of Providence General Superior Sr. Pauline Lally delivered a passionate speech to the gathering. The following is a brief excerpt.

Poverty is not necessarily the result of individual moral failure or poor life choices entirely but of governments and corporations that idolize the market and put profits before not only people, but indeed before all creation. Therefore, WE HAVE TO BE POLITICAL. Because the problem is political, the solution has to be political.

A society is judged by how it treats its most vulnerable.

Referring to the reading from the prophet Micha, we see that iniquity is very complicated, while the virtues of justice are very simple: Love Tenderly, Act Justly and Walk Humbly with your God. This is the attitude we want the politicians to take to the budget. Simplicity is self-sustaining. Complexity carries its own death sentence because shaky affluence is always built on sand.”