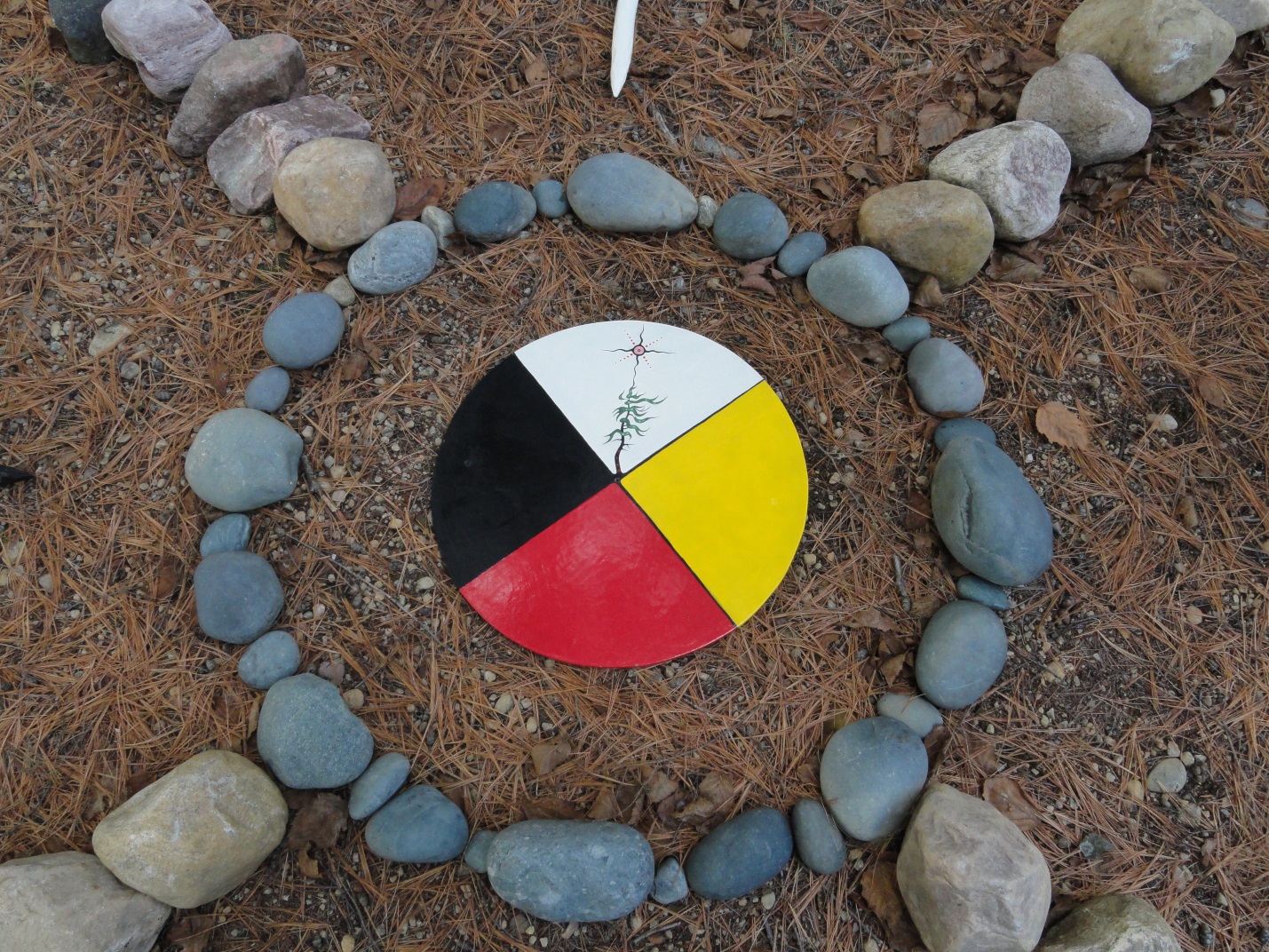 Photo: sideroadsofmuskoka.wordpress.com
Ojibwe Medicine Wheel. Participants of the Talking Circle all received a tiny brooch made of red, white, black, and yellow beads on a circle of leather illustrating the Four Directions of the Medicine Wheel.

I am the granddaughter of settlers.

In the 1880s my paternal grandfather arrived from the Austrian-Hungarian Empire, settling on land in southeastern Saskatchewan. While he purchased his prairie farmstead from the Canadian government, it rightfully belonged to the Assiniboine people, who under Treaty 4 in 1875 signed over some 200,000 square miles.

My mother’s father purchased land in central Nebraska in the early 1900s. It was rightfully Pawnee, but they had been devastated by small pox and annihilation of the buffalo, ending up on reservations in Nebraska and Oklahoma through a series of treaties.

Growing up in Saskatchewan, I was surrounded by aboriginal history, culture and peoples. An ‘Indian’ boy lived on my block and attended the same elementary school. Outside of Regina I collected arrowheads and found teepee rings, circles of small boulders used to hold down the edges of buffalo skins. My family vacationed in camp grounds beside Lake Katepwa in the stunning Qu’Appelle Valley, originally home to the Cree and the Saulteaux. Nearby were three reserves  – Pasqua, Gordon, and Standing Buffalo.

As teenagers at the Globe Theatre school outside Fort Qu’Appelle we examined ‘the Indian question’ during one of our after-dinner discussions. Two students from Standing Buffalo burst into tears and fled the room. Some of us felt ashamed enough to take up the invitation to visit their home. No paved roads. No running water. Outdoor toilets. Ramshackle houses with wood stoves, broken windows, and gaping holes where the doors should have been.  In nearby Lebret, a residential school remained open.

My partner taught school at Piapot Indian reserve, birthplace of Buffy Sainte-Marie. We did what we could to keep the children who came to school hungry and poorly clothed fed and supplied, but it was exhausting and overwhelming. After one year, we left.

During university I taught an English course at Regina’s Saskatchewan Indian Federated College. Most of my students knew nothing of their own history or culture. I tried to find books by Canadian indigenous authors but other than Maria Campbell’s Half-Breed, and a few poems from anthologies, I had to rely on American Native writers instead. When I read up on Plains Indian history it was clear that we had stolen their lands, suppressed their languages and cultures, outlawed their religions, undermined their governance structures, and destroyed their sense of self-worth.

Feeling ashamed, I apologized to my students. I couldn’t think what else to do.

Then recently I found myself at a Community Talking Circle, the first of ten organized by the City of Kingston’s Sesquicentennial Engage for Change project funded by the Government of Canada and facilitated by Three Things Consulting. Rooted in the United Nations Declaration on the Rights of Indigenous Peoples, the project is guided by the Truth and Reconciliation Commission of Canada’s 2015 “Calls to Action”.  Ottawa convened the Commission in light of the outrages at residential schools like the one I saw at Lebret.

Arriving at the downtown hotel, some forty participants were greeted by the Community Foundation for Kingston and Area’s Tina Bailey, and Terri Lynn Brennan, Program Coordinator of Cultural Services for the City of Kingston. Their warm welcome set the tone for the day.

Beginning with the question addressed to each of us in the Circle, “What does Reconciliation mean to you?”  the day was filled with the facilitators’ and indigenous participants’ encouraging smiles, genial comments, and unfailingly polite rejoinders, no matter how awkward or ignorant our responses might have been. Our connection to one another was illustrated by the ‘spider exercise’: the first person speaking held the end of a rope and extended an invitation to the next speaker by tossing them the rope, resulting in an intricate web of relations.

A history of First Peoples in the area now known as Kingston – then called Katarokwi, meaning ‘a place where there is clay’ or ‘where the limestone is’ — commenced with a slide show. We were told who first lived on the land, the languages they spoke, and who their allies and enemies were. We learned of the Crawford Purchase of 1783 when the Mississauga ceded the territory of present-day Kingston to the British Crown, and that Belle Island – a golf course and former garbage dump — was once a Huron hunting/fishing settlement and burial ground.

The Circle opened with a smudging ceremony and Mohawk creation story. A feast of moose stew, roasted bear, bannock, green salad, strawberry cordial, and pumpkin mousse prepared by Tyendinaga caterer Carol Anne Maracle marked mid-day. Each participant also received a ‘feast bag’ holding reusable dishes and utensils, as well as a towel and washcloth. The Circle closed with more gifts: a fridge magnet featuring the four sacred medicines for smudging – cedar, sage, tobacco, and sweet grass; a ‘flag’ of loose tobacco in red cloth tied with a white ribbon, signifying respect and appreciation for knowledge being shared; a tiny brooch made of red, white, black, and yellow beads on a circle of leather illustrating the Four Directions of the Medicine Wheel, handmade by Tammy Nelson’s daughters.

I was overwhelmed by the generosity, inspired to learn more, moved to explore my heritage, and to atone for my own part in history.

We came to understand that Reconciliation has no end, only a starting place. Learning and sharing are the first steps along the way.