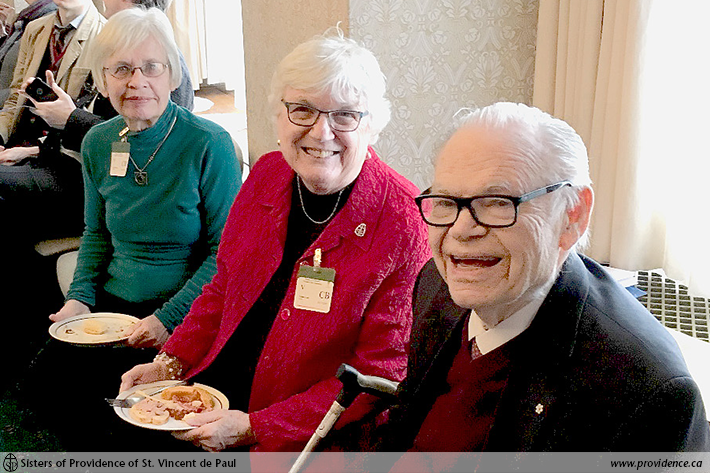 “It is rare for a Canadian to be presented with the Nobel Peace Prize,” said Joe Gunn, Executive Director of Citizens for Public Justice and friend of the Sisters of Providence. “It is also rare for women to be the recipient of such an honour.”

Along with my fellow PeaceQuester Beth Pater, I joined Joe to attend a unique ceremony in the Parliament buildings before Christmas.

On that dreary December day we honoured Toronto resident Setsuko Thurlow and Beatrice Fihn, the Executive Director of the International Campaign to Abolish Nuclear Weapons, or ICAN. (I like any name that proclaims “I can!”) The two women were soon to travel to Norway to receive the Peace Prize on behalf of ICAN.

Setsuko was a 13-year-old Hiroshima schoolgirl when the United States dropped an atomic bomb in 1945. She has recounted how some 30 girls with her in a classroom were all practically burned alive that day.

ICAN draws attention to the potential of nuclear destruction, advocating the UN Treaty on the Prohibition of Nuclear Weapons, adopted last July by 122 countries.

Our presence in Ottawa was to honour people who take seriously the nuclear threat.

Organized by Parliamentarians for Nuclear Non-Proliferation and Disarmament, the reception was well-attended, although Liberals were hard to find. Prime Minister Trudeau has yet to congratulate Ms. Thurlow or ICAN, and Canada has not signed the treaty.

Canada’s Prime Minister has opined that, “There can be all sorts of people talking about nuclear disarmament, but if they do not actually have nuclear arms, it is sort of useless to have them around, talking.”

None of the 80 guests at the Parliament Hill reception felt that their work for peace was “useless.”
Beth and I sat with Murray Thompson, 95, the dean of Canada’s peace movement. Murray has convinced over 1,000 of his fellow Order of Canada recipients to sign a statement calling on members of the UN – including Canada, “to endorse, and begin negotiations for, a nuclear weapons convention as proposed by the UN Secretary-General.”

Sister Pauline Lally, a founding member of PeaceQuest. For more on this and other PeaceQuest stories please visit PeaceQuest.ca