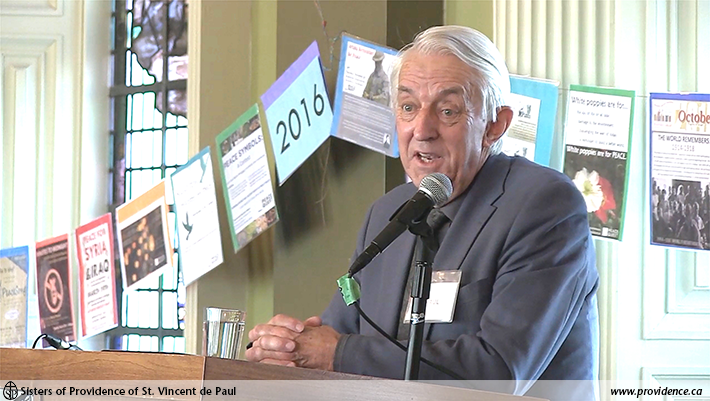 PeaceQuest wound up its formal events on November 11 with our third sold-out Remembrance Day concert at The Isabel. It was an afternoon of song and celebration.

The previous day we assembled 150 people at City Hall’s Memorial Room for a conference called “Imagining Peace.” The ornate room, with its stained glass images of war, was adorned with dozens of flags, each a poster for some sixty events PeaceQuest had organized over the past five years.

Two giant puppets, one of Nova Scotia civil rights pioneer Viola Desmond, were positioned on one side of the stage. On the other stood two uniformed mannequins of World War I soldiers, one British and one German. Pinned to their tunics were buttons PeaceQuest had produced: “To remember is to work for peace.”

But our final events had a focus well beyond questions of peace and war. In a way they mirrored the description of peace we’d developed in 2013.

Peace is an active way of living, resolving conflicts cooperatively, respecting the wellbeing of the earth and all peoples.

Renowned English peace scholar and activist Paul Rogers came from Yorkshire to deliver a remarkable keynote address at Imagining Peace. He explained that the 2020s will be the pivotal decade that will determine the future of the earth and all the species it supports. Not just with respect to war prevention. But also how we’ll deal with global climate chaos, the migration crisis and the savage inequalities that separate us.

Paul recalled a meeting he had organized back in the 1970s. Geographer Edwin Brooks gave what Paul described as “an extraordinary paper” on the way the world was headed. And this was forty years ago.

“He said what we would end up with would be – and I can quote this verbatim – ‘A crowded, glowering planet with massive inequalities of wealth buttressed by stark force yet endlessly threatened by desperate people in the global ghettoes.’ ”

Prof. Brooks was spot on. Yet despite such foreboding warnings, Paul urged us to face up to the challenges as we approach his pivotal decade of the 2020s.

He skillfully wove personal anecdotes into his Kingston talk, speaking lovingly of his grandchildren who will likely see the twenty-second century. Citing the work of his son Tom, a renewable energy engineer. Explaining how it is possible to do away with the internal combustion engine. And how we need to redefine “security” away from a fear-based, military approach to one rooted in food and energy security.

A longtime analyst of nuclear disarmament and terrorism, Paul was candid about the choices ahead. “If you’ve spent 40 years of your life working on nuclear destruction and terrorism, you have only three personal choices ahead of you. You’re either suicidal. Or alcoholic. Or optimistic.”