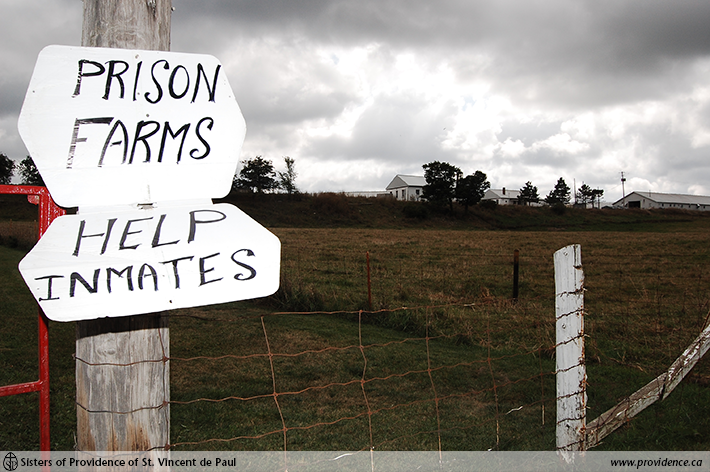 Why it’s wise to keep them,
folly to close them down

Stroke a cat.
Pet a dog.
Groom a horse.
Observe any creature, even fish swimming in a tank.

These activities have one thing in common: All lower blood pressure, relax us, and make us feel better about being alive. We are hard-wired to connect with our fellow creatures, and pet owners in this country — who spend $4 billion annually on their animal companions — know it.

The animals tended by prisoners in the barns at Frontenac Institution in Kingston do not rank high on the chosen list of animal companions. I am speaking of cows and chickens.

A funny thing about chickens. Susan Orlean’s recent piece in The New Yorker (“The It Bird: The Return of the Back-yard Chicken”) must have struck a chord with a producer at Global TV, for there she was on October 12 being interviewed by Steve Paikin on his current affairs program, The Agenda. Orlean notes that city-dwellers all over North America are going back to what used to be the norm prior to the 1950s. Raising chickens, she says, is “a declaration of self-sufficiency, a celebration of handwork, and a push-back from a numbing and disconnected bigbox life.”

When I lived in the country, we had chickens. I found it soothing to watch them scratch in the dirt; Orlean likewise. I liked collecting still-warm eggs, liked seeing chicks peeping and huddled under a heat lamp in the spring, and hated the task of slaughtering the oversized meat birds a few months later. For me, chickens led to ducks, a cat, dogs, a horse. I live in the city now, but I was stamped by my experience nurturing animals. Some federal inmates know the feeling.

There are six prison farms across Canada — at Bowden in Alberta, at Riverbend in Saskatchewan, at Rockwood in Manitoba, at Westmorland in New Brunswick, and two in Kingston, Ontario (Frontenac and Pittsburgh Institutions). The Harper government plans to close them all by 2011.

No city in Canada has the prison population we do in Kingston, and it’s here that the response to the proposed closing of prison farms has been most vigorous. A debate held at St. Lawrence College in the city last March drew some two-hundred and fifty people, another one is scheduled for December 3 at Frontenac Secondary School (virtually a stone’s throw from Frontenac Institution), and letters to the editor of local newspapers continue to decry the move. The National Farmers’ Union, the Canadian Labour Congress, the Public Service Alliance, the Council of Canadians and the Sisters of Providence of St. Vincent de Paul all protest the closing of prison farms. A national coalition of objectors, Save Our Farms, has formed to continue the battle. On the SOF web site is a letter from an inmate at Riverbend who declares, “The farm has saved my life.”

Volunteering with the John Howard Society in the summer of 2008 as part of research for a book, I got a taste of both Frontenac and the prison next to it, Collins Bay Institution. I remember being inside the latter’s hot and high-walled yard devoid of any living thing, and the crackling tension that pervaded the medium-security jail. Frontenac, on the other hand, is minimum security. I didn’t actually get to the barns, but I remember staring out over rolling green fields — right in the middle of the city. Frontenac may well be the largest urban farm in Canada and it represents some inmates’ last stop before walking out the prison gates.

The Harper government wants to close prison farms for several stated reasons. One is that few inmates who work in the farm program actually go on to farm once released.

Well, of course. An ex-convict needs capital to buy land and farm machinery, and where is he to find that? A prisoner who worked on the land and with animals leaves jail with something not easily captured on ledgers, something that most prisons are hard pressed to provide: the beginnings of groundedness and a sense of peace, perhaps even a feeling of job well done.

Wayne Easter, a longtime farmer and a former solicitor general who was in charge of our prisons, was on CBC Radio’s The Current on October 6 as part of a panel to discuss the closing of prison farms. He counters the government’s contention that these operations are a $4 million annual drain on the system (the figure is from Corrections Canada, which refuses to divulge the accounting). Easter noted that since the food produced by those same farms is worth almost $3 million annually (another government figure), the savings are slim.

But duelling numbers is a mug’s game that misses the real point of prison farms. Easter told me he visited the farm at Frontenac as recently as October and he left impressed with the inmates’ sense of pride in their work (one with welding skills had ingeniously cobbled together a cowlift) and genuine affection for the animals in their care. “Their eyes light up and their chests stick out when they talk about the animals,” he says. “It’s not like these men are building furniture. They’re dealing with living creatures.”

It’s an old remedy using nature to heal damaged souls. The Quakers who started York Retreat in England in the late 18th century were appalled by the punitive and callous treatment of the mentally ill. The Quaker response was to have asylum inmates work on a farm growing plants and tending animals. The lessons learned are simple and timeless. Nurture a living thing and it grows, neglect it and it dies. And the beauty of plants and animals is that they are free of all prejudice: They reward the nurturer and care not that he has a record as long as his blue-tattooed arm. (For more on the exhaustively researched impact of animals on prison populations, nursing homes, schools and hospitals, check out the web site of the Canadian Foundation for Animal-Assisted Support Services.)

Onmates at Frontenac Institution don’t have to work on the farm, but the ones who choose to rise at 4:00 to 4:30 a.m. Inmates resent all the dead time in prison — waiting for gates to open, for programs to commence, for the institution’s schedule to unfold. On “the farm camp,” as they call it, there is no dead time. As any farmer will tell you, the work is both endless and endlessly rewarding. Up to 75 inmate farmers at Frontenac learn about punctuality, self-reliance, safety around large animals, the operation of heavy machinery, work ethic, crop management, animal husbandry and a great deal else.

The 130 milking cows at Frontenac are from prize-winning genetic lines that date back to 1942, producing more than 4,000 litres of milk a day. Both milk and eggs feed prisoners in Ontario and Quebec, with a huge allotment of eggs also going to a Kingston food bank each year. With its on site abbatoir, this whole prisoners-feeding-prisoners enterprise strikes all the right economic and environmental notes.

What galls those who want prison farms to continue and even expand is that the government seems bent on paving the land (Grade 1 agricultural land) and building new cell blocks, even super jails. Craig Jones, executive director of the John Howard Society of Canada, is puzzled by the move. “It’s now on the record,” he says, “that they are going to use that land to build prisons or expand the current infrastructure, which makes sense because they already own and control the land. But it seems a strange time to build prisons when crime rates are in decline all across the OECD, including Canada and the U.S.”

John Edmunds, the national president of non-correctional staff in prisons who also works at Frontenac Institution, says “We have something wonderful operating right here, and we don’t understand why they want to close it. It’s one of the worst decisions they have ever made.”

Andrew McCann, who teaches a course at St. Lawrence College in Kingston on sustainable agriculture, remarks on the peaceful environment on the Frontenac farm. Inmates work with local farmers and get something else they don’t get back inside: respect. The employer/employee dynamic in the barns is a far cry from the guard/con dynamic on the cell blocks. There is no violence in the barns, no anger either (not least because handling a cow roughly risks a powerful kick). One farmer told McCann that he understands why Frontenac’s unique chemistry works on even hardened convicts. “The cows are all mothers,” he observes.

Farming can soften the blows of incarceration, lets confined men breathe again, and connects them with primal elements: the soil and seasonal round, the birth and death of creatures that offer milk, meat and eggs. It’s all so plain to see.

Eventually, the vast majority of prisoners get out. Will at least some of them emerge with a newfound sense of compassion, or will most be seething with rage? Black-topping the 800 acres at Frontenac or the 1,200 acres at Pittsburgh to create factory prisons is wrong, just as closing the other prison farms in Canada is wrong, and for all kinds of reasons. One of them is that we on the outside would all be less safe, not more so.

Lawrence Scanlan lives in Kingston. His book, A Year of Living Generously: Dispatches from the Front Lines of Philanthropy, will be published by Douglas & McIntyre in the spring.