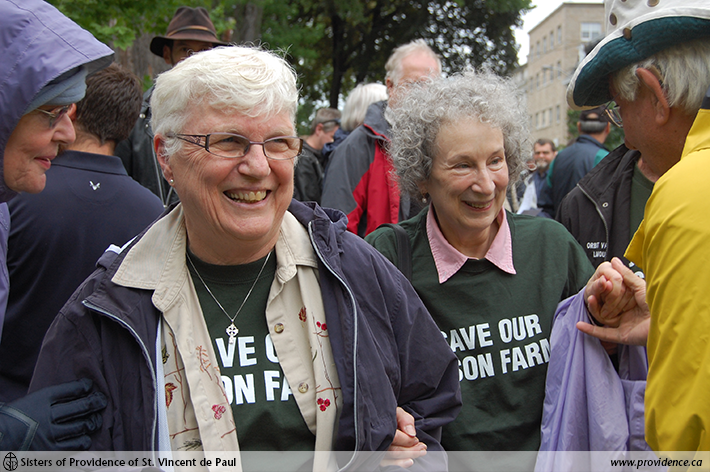 Sister Pauline Lally and Margaret Atwood lead the crowd on a march to CSC headquarters. Both women received standing ovations after speaking to the crowd inside Sydenham Church.

A local farmer first discovered the plan to close Canada’s six remaining prison farms in February of 2009. Since then, the opposition to the proposed closure has been growing across the country.

On March 30th a group, including farmers, ex-inmates, Sisters of Providence and a donkey, drove up to Ottawa to address the Public Safety Parliamentary Committee. Sr. Pauline spoke at the hearing and asked “that a moratorium be placed on any dismantling until independent experts have had an opportunity to review the value of the farm program.”

A member of parliament re-worded this request, wrote it into a motion and on the next day the motion was passed. Parliamentary processes mean that it can take up to 120 days before it is voted on in the House.

The Save Canada’s prison farm coalition is now calling on the current government to honour the motion and place a moratorium on any dismantling.

With the pending sale of the Frontenac Dairy Herd approaching, weekly town hall meetings were organized in Napanee, Athens, Inverary, and Perth with hundreds of farmers and interested folk attending.

On June 5th, Margaret Atwood joined one thousand people at Sydenham United Church and on a march to Correction Canada’s headquarters. Inside the church, Sr. Pauline and Margaret Atwood received standing ovations for their heartfelt speeches. Both women asked important questions of our current government. Sister Pauline asked why “correct” something that is already working? While Margaret Atwood wanted to know if our government is listening?

A sign was hung on the door of Correction Canada’s headquarters. It reads: ‘Prison Farms belong to all Canadians. Stop ignoring democracy. Save the Farms NOW!’

Time is running out. Please visit;
www.saveourprisonfarms.ca to find out how you can help save Canada’s prison farms. 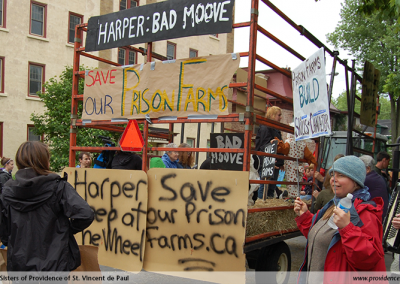 Save our Prison Farms 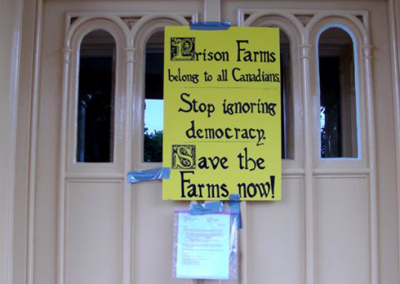 Prison Farms belong to all Canadians 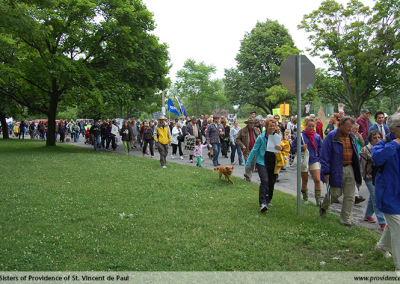 The crowd begins the march to King Street. 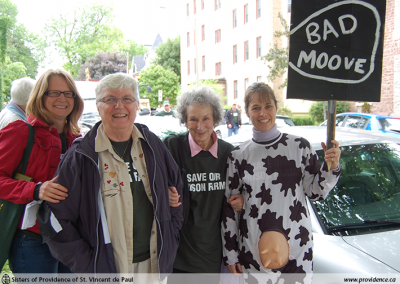