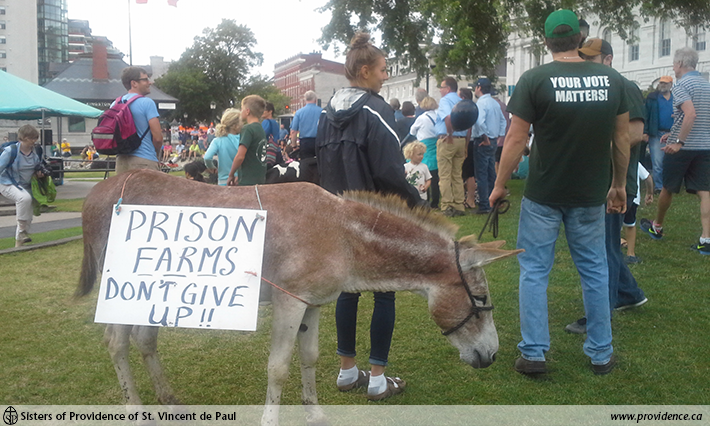 The Save Our Prison Farms organization put out the message that the town hall meeting being hosted by Public Safety Minister Ralph Goodale and Corrections Services Canada was “a pivotal moment,” in the struggle to re-instate prison farms. And their call for attendance was answered in plenty. The rally brought lots of people and, when the rain started to pour, the City Hall meeting room started to fill up. Hundreds streamed in.

Minister Goodale was welcoming — he is a farm boy from Saskatchewan and he understands farm issues and he knows drought, which Kingston has experienced this summer. Local MP Mark Gerretsen welcomed the minister, thanking him for holding this session in Kingston where the issue is important. Later, MPP Sophie Kiwala spoke to the toll the loss of the prison farms had on the people of the region during what was already a dark political time. The evening seemed to be a kind of catharsis for the many who had worked to have their opinions heard, even as time forced many to give up their places at the mics. 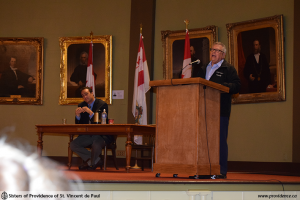 Not only was the Minister and a number of his staff present, so too were Correctional Service Commissioner Don Head and the regional director.  Agricultural consultant Miles Front facilitated the meeting.

A good number spoke their piece including gardener Annie Richard of the Heirloom Seed Sanctuary. At least nine Sisters and numerous Associates were in attendance, as well as Motherhouse chaplain Friar Ed Debono. The Sisters of Providence were given thunderous applause for their work of social justice. And Sister Pauline Lally was mightily applauded when she spoke — bringing the voice of the inmates themselves (See below)

All the interventions were in favour of prison farms but there were many takes on how this could be done. One set of speakers spoke about valuing the life of animals and perhaps plants-only should be considered, or making the farms a sanctuary. The staff of the prisons supported the farms through their union. Profs, students, social workers, chaplains and citizens spoke of the farms as a form of rehabilitations. Farmers spoke about the arable land and the need to keep it as working land.  Former inmate Pat Kincaid was moving in his testimony of how prison farms changed his behaviour after getting out so that “you have been safe from me for seven years,” rather than he continuing to be a threat to society or getting arrested again.

Another significant conversation was about the purpose of corrections. The feasibility study of which the town hall was part posed the question in terms of agribusiness, hire-ability, skills. Many spoke to those things, but there was also a strong thread about rehabilitation for its own sake, for the sake of the families of inmates. Not all will be employable. Not all will find a direct link from their prison farm experience. But the responsibility and involvement promote empathy, and that might be enough to change lives. 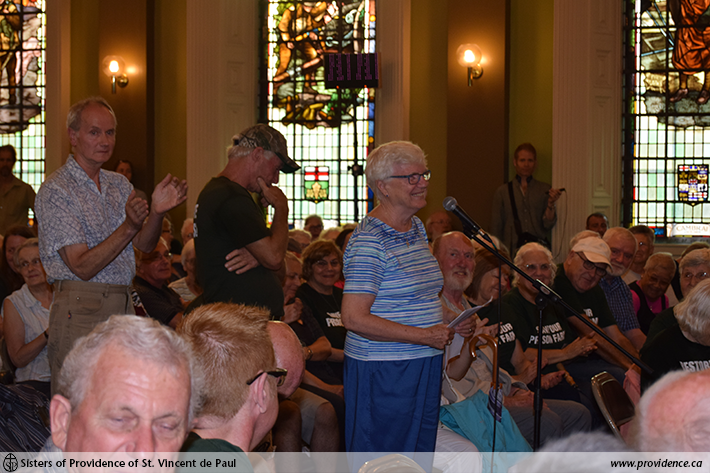 I’m Sister Pauline Lally of the Sisters of Providence. Thank you for this opportunity to speak tonight.

Each Sunday some of the men from Pittsburgh and Frontenac Institutions come to our Motherhouse for Mass. This past Sunday I met John Schaefler in our chapel. He’s chair of the Inmate Committee at Frontenac Institution. When he heard that I planned to attend this Town Hall meeting, he asked if I might present his perspective to this meeting.

Several weeks ago when John learned of the CSC survey about Prison Farms, he had 50 hard copies printed. Prisoners can’t access the survey on line. when all were completed, John compiled their responses with great care and respectfully sent them to you. Because he heard no response, he wondered if you had received his package.

It would take a lot of work for some of the fellows to complete that survey. They should be praised for their efforts, not ignored. After all, Corrections is about rehabilitation, building up one’s dignity and self-worth. How are we assisting them in this area, if they are not considered worthy enough to be acknowledged?

The farm was very important to the inmates.

Their responses are based on reasonable knowledge of the facts surrounding the closure and CSC’s subsequent activities. You will discover their responses to the survey, from an inmate’s perspective, are quite enlightening.

Regarding the first two areas, the catchphrase, “Jack of all Trades,” describes any farm worker. There will be need of farmhands. Besides, what one learns working on a farm, one learns for life. The skills are immeasurably transferable.

Caring for livestock develops compassion and empathy – so often lacking in male prisoners. It’s a form of therapy. It’s all part of the rehabilitation process, providing an opportunity for furthering personal growth, a good work ethic, punctuality, responsibility, self-worth, the relevance of being a member of a team.

Regarding costs the inmates pointed out that CSC saved money as they did not have to “shell out funds for re-incarcerating parolees. At this site, inmates who were granted parole while employed at the farm had the lowest rate of parole suspensions.”

Under the 3rd domain, the inmates have developed a compelling case regarding increased pay for work. This should be seriously considered when the farms return. It is fair to say that it doesn’t promote public safety when an inmate returns to society with only $50 in his pocket.

In the final analysis, largely it is the prison population’s collective opinion that the dairy and poultry operation should never have been closed.

And Kingstonians support the reestablishment of the prison farms! 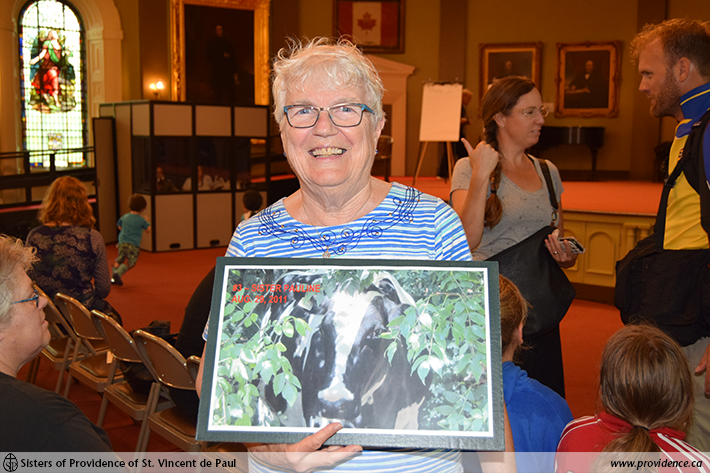