Time running out to save prison farms 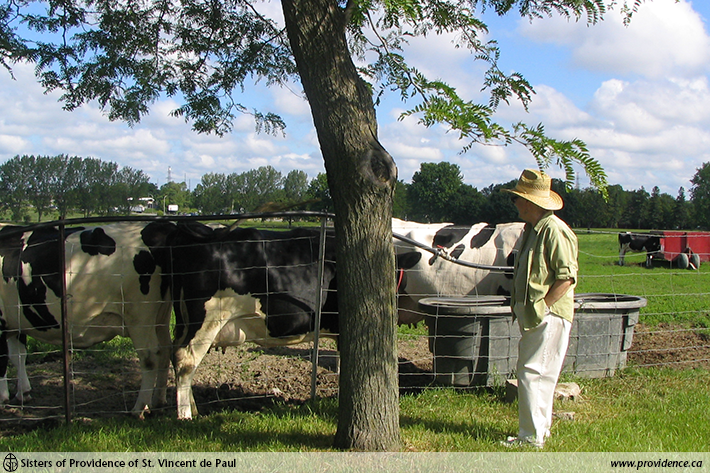 Sister Pauline Lally visits the prison farm at Frontenac Institution along Bath Road during a visit in July 2009.

Time is running out to save prison farms. In a few months, the Frontenac Institution dairy herd will be auctioned off. This herd genetically dates back to the 1800’s and when it’s sold, the decision to close Canada’s prison farms is virtually irreversible.

To highlight the urgency, the Kingston Save Our Prison Farms committee organized a series of demonstrations at Correctional Service of Canada (CSC) sites in Kingston.

In late February and early March, supporters staged pickets in front of Frontenac Institution, in front of CSC headquarters at 440 King Street, in front of Pittsburgh Institution and at CORCAN, the financial arm of Corrections.

As well, prison farm supporters are calling on the federal government, and Public Safety Minister, Vic Toews, to hold open discussions with the public on the future of the prison farms.

“This is a program that inmates, staff, and Canadians are proud of. It is very difficult to find someone who thinks shutting down the prison farms makes sense,” says Andrew McCann, of Urban Agriculture Kingston, and a member of the Save Our Prison Farms campaign. “When you read the government’s 2007 Road Map to Public Safety, you see that these farms are getting in the way of plans to build regional super jails with privatization of food, maintenance, and other services. The prison farms are in the way of the Americanization of our prisons that the current government is seeking.”

“Will the new Minister for Public Safety, Vic Toews, give Canadians a chance to discuss this issue by holding public meetings?” asks Dianne Dowling, also a member of the prison farms committee. “To date, there has been no public input, nor has there been any expert review on our current government’s agenda to radically change Corrections in Canada.”

Sister Pauline Lally, General Superior of the Sisters of Providence asks, “Why does our current government want to stop something that is working economically, emotionally, socially and sustainably? Performing meaningful and productive work gives inmates a sense of contributing to the community that, in some fashion, they have damaged by their actions.” The Sisters of Providence have been involved in the campaign to save the prison farms.

Some well known Canadian musicians are lending their voices to Save our Prison Farms campaign. Kingstonian Sarah Harmer and others will perform on Saturday, March 20th at Sydenham Street United Church beginning at 7 p.m. Other entertainers include Fred Penner, Luther Wright, Chris Brown and Maya Thau-Eleff. It’s being billed as an evening of music and words to save Canada’s prison farms.

For more information on the campaign, visit: www.saveourfarms.ca and www.nfuontario.ca