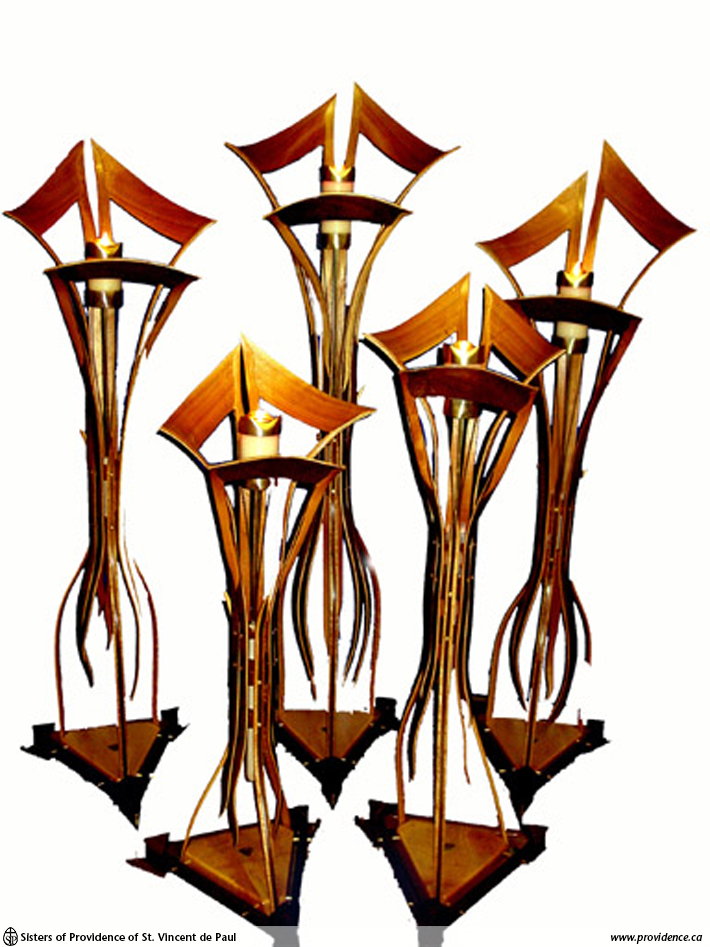 Some believe they’re looking at angels, others perceive flowers, wings, flames, and even sails. But whatever the interpretation, there is agreement on one thing — the new candle holders in the Chapel at Providence Motherhouse are magnificent.

The five candle stands are made with bended wood, giving a whimsical shape that were designed to look like the petals of flowers.

Co-ordinator of Pastoral Liturgy Albert Dunn says the final selection of the design was the culmination of a three year process.

“The work of artist Marcel Dionne was noticed by the decor committee at a craft show in Toronto in March 2007. Marcel had not specifically worked on candle stands previously, but his design style immediately caught the attention of the committee,” says Albert.

Marcel Dionne used walnut, birdseye hard maple and black cherry in his design which was chosen for its elegant yet simple appearance.

All the wood, except the maple, used in Marcel’s design are found near his home in Combermere, a village located along the Madawaska River in South-Eastern Ontario. He made all the brass pieces by hand on an old borrowed lathe.

“This is as true to Renaissance Art as I could be”, says Marcel Dionne. “In the design of Spirits singing praises of light, I was looking for them to be able to have the visual strength to stand alone, and together they call upon the power in numbers to create a spiritual and inaudible shout.”

Marcel visited Kingston to see the chapel in April, 2007 and agreed to submit some designs taking into consideration the specifications of the committee. Three designs were submitted in May, 2007. These were reviewed by members of the committee and the General Council. The final design was selected and approved in June, 2007. The much anticipated finished candle stands were delivered in March 2008 and used officially for the first time at the Easter Vigil 2008.