Resting in God at the Motherhouse

The Week of Prayer for Christian Unity was observed January 18-25, 2017. The Motherhouse Community hosted a celebration of prayer in the style of the Taizé Community on January 24 with invitations extended to St. Luke’s Anglican Church, Crossroads United Church and St. Matthew Evangelical Lutheran Church as well as three neighbouring Catholic Parishes – St. Joseph, Holy Family and St. John. 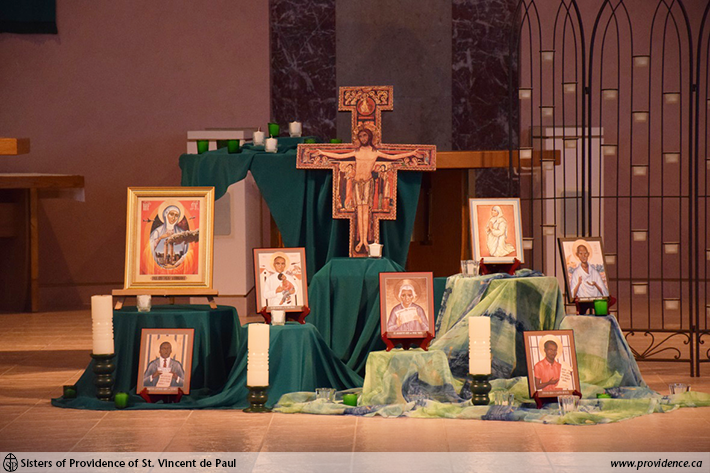 This prayer is the creation of a monastic community in Taizé, France, founded in the 1940’s by a Swiss man known as Brother Roger. As pilgrims began coming to Taizé, the brothers were faced with the challenge of how to allow thousands of young people from around the world to worship in communion with all Christian traditions. Taizé prayer incorporates song, scripture and silence. “It is a time to rest in God, to let the words listened to and sung penetrate one’s being.” (Brother John) Meditative singing allows everyone to take part in a time of prayer together.  Simple multi-lingual phrases are used as a way of freeing our minds from concentrating too much on the text and allowing ourselves to pray through the music without distraction.

A regular feature is the use of icon-like representations of various holy people. This year as well as the traditional San Damiano crucifix, focus was on contemporary peace seekers including Ghandi, Mother Teresa, Dorothy Day, Steven Biko, Oscar Romero and Martin Luther King as well as a 9/11 inspired depiction of Mary, Mother of Sorrows.