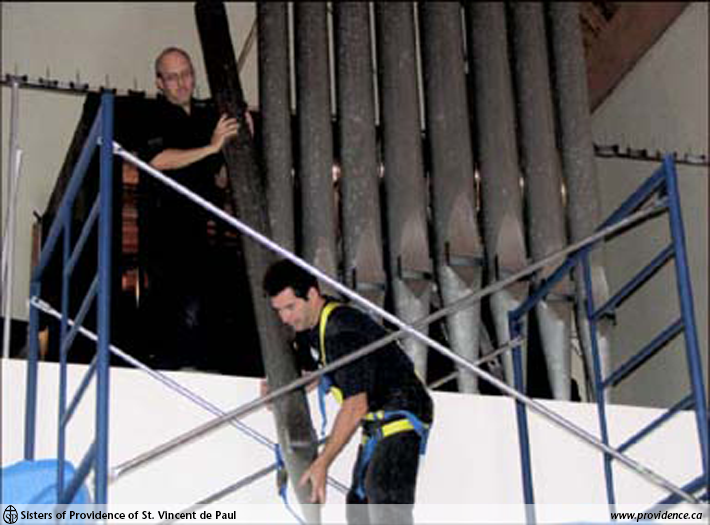 After 37 years of use, the pipe organ in the Chapel at Providence Motherhouse is being restored. After almost four decades, age is taking a toll on the once rich sounding instrument.

The four-month restoration project began in late July by a Kingston-based company. Originally from Quebec, Alain Gagnon has enjoyed a long and well-established career as a pipe organ specialist including eleven years with the internationally known Casavant Freres of Quebec. Alain does more than repair musical instruments-he plays them too! As a teen, he became a percussionist and French horn player. Alain is an organ voicer-he adjusts and balances every pipe and stop. Voicing involves adjusting the sound of the pipes to match the acoustics of the space.

“The revoicing will eliminate noises and imperfections and the result will be a much improved sounding organ that will correspond to the Chapel acoustics and the need of today’s organist,” says Alain.

“The organ at Providence Motherhouse is an excellent organ but from my experience, the sound could be improved,” says Alain.

The project will involve removing pipes from each tower and shipping them to Alain’s workshop in Elginburg where they’ll be cleaned, refinished and then returned to the Chapel.

The organ has historic significance. Installed in 1969, after construction of the Chapel of Mary Mother of Compassion, the organ has witnessed countless liturgical events-vow ceremonies, Jubilee, funerals and baptisms.

Co-ordinator of Pastoral Litury, Albert Dunn, is directing the renovation project. He says the final voicing on site will be done in November so the organ will be ready for Christmas.