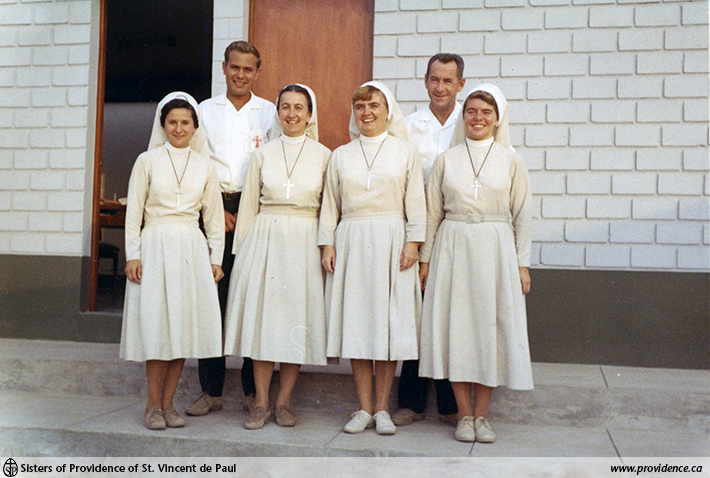 As we, Sisters of Providence of St. Vincent de Paul celebrate 50 years of missionary work with our people in Carabayllo, Peru, I was given the privilege of writing my recollections about our beginnings in Peru.

In 1966, Vatican II requested that religious congregations assist our brothers and sisters in Latin America. Sisters Lenore Carter, General Superior, and Marian Farnand, Assistant, went to Peru and Guatemala with the intention of discerning where our sisters could be of assistance.

Eight Sisters were chosen from the many that volunteered and our preparations began by participating in a four month study of the Spanish language and the culture of Latin America in Ponce, Puerto Rico. We were among 75 Peace Corp Volunteers, priests and sisters from the United States. From there, the Sisters of Providence left for their prospective missions of Peru and Guatemala. We arrived in Peru at 10:30 p.m. on December 9, 1967. There was a group of priests, sisters and lay volunteers who came to the airport to welcome us. We were then brought to the convent of the School Sisters of Notre Dame from the USA who would be providing us with lodging until our home was ready for habitation. On December 10 Father MacDonnell came to bring us to the parish for a reception by the people. There was an arch at the entrance of the town decorated with flowers and flags and the people presented the Sisters with more flowers, flags and even a pigeon. An elderly man played a violin and fireworks were set off to greet us as a band accompanied us to the chapel where Father MacDonnell celebrated a Mass of Thanksgiving for our safe arrival. The chapel consisted of an earthen floor, pews consisting of unpainted planks, with one side of the chapel completely open. Following Mass, the people had a wonderful program planned with singing, dancing, speeches and later a sport’s event. There was a blessing of the house followed by refreshments. As we walked around the barrio, the severe poverty in which the people were living was evident. There was no electricity, no water and most houses were made of straw or reed. Some of the houses appeared to be clinging precariously to the hillside.

Fathers MacDonnell and Adamyk celebrated Mass in our dining room twice a week and we also prayed together on a regular basis. Father MacDonnell spoke of how 40,000 desperately poor and neglected people lived in this area. He wanted us to work as a team to see the various needs and assess them together. He wanted us to be part of a Christian community and he hoped that our total efforts and goals would be reflected in our lives as we reflected on the Gospel message. He felt that through group dynamics and reflection, the Christian message could become a living reality. His advice to us was to study, reflect, pray and become a community of love. He said and I quote: “If you do nothing else this first year except visit the homes and give the people a sense of worth and dignity, you will have accomplished a great deal.” What great words of wisdom!

There have been many new beginnings along the way, however, the greatest joy for me was to experience the love and acceptance of the people who in the face of their extreme poverty, taught us about simplicity of lifestyle, and courage amidst poverty. They opened my eyes to the many injustices and inequalities that existed between rich and poor.

After 50 years of service by so many priests, sisters, associates and lay volunteers who continue to pray and work with the people and through the generosity of those who give both spiritually and financially through the Marillac Mission Fund to support the mission of the Sisters in Peru, may the mission, “Cristo Luz del Mundo” (Christ, the Light of the World), continue to bear fruit.