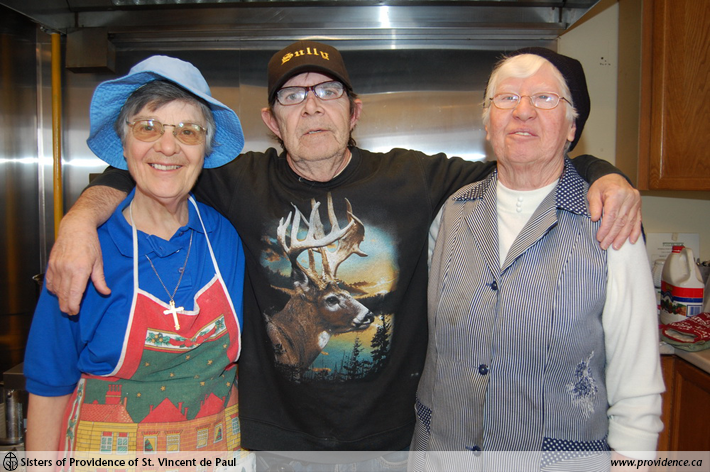 Thirty-three years ago, Sister of Providence Loretta MacAndrews told graduates at Kingston’s St. John’s School “Christ relates to everybody on both sides of the track.” She was speaking from experience.

Appalled by poverty in Guatemala where she ministered briefly in 1979, Sister returned home, determined to help the poor right here in Kingston. That same year, Sister was named Director of the Kingston St. Vincent de Paul Society warehouse, a well-stocked space with clothing and furniture. In 1982, her strong advocacy for the poor helped create a Hospitality Centre at St. Vincent’s where hot meals are prepared and served each weekday.

Fast forward to 2012. Sister Loretta is deceased but her presence is very much alive at ‘Vinnie’s’ in Kingston’s north end. Her photo hangs in the dining area that is named for her. Beside the photo hangs a large chalkboard with the cheerful message, ‘Have a wonderful day’ punctuated by a smiley face. Today, Sisters Alda Brady, Josephine Doiron and Mary Bernadette are the faces of the congregation at St. Vincent’s. But a search in the Archives reveals a long list of Sisters who have missioned at the Stephen Street centre over the years.

On a cold and sunny winter day this past March, it was business as usual — busy but organized. In the main room of the cramped warehouse on the back property, shoppers shuffled through the many racks of meticulously organized clothing. Beyond the ‘store front’ just to the right and in full view of the visitors, Sister Alda and volunteer Lynda Laurendeau rummaged through bags of donations. They save the gently used clothing and items; the damaged stuff is discarded.

A middle aged man approaches a small desk at the back of the warehouse to order groceries. Sr. Alda offers a hug and with a big grin, telling the visitor “They’re free too”! On this day, the regular client is here for socks and food.

It’s almost lunch time inside the two storey main house a few steps away from the warehouse. Mouth-watering aromas waft from the kitchen. Food manager and chef Richard Sullivan, (Sully) is making a yummy meal; turkey penne, bean and sausage soup, cupcakes and apples. “I like to change the menu a bit, but still be creative with limited funds,” explains Sully. He’s been kitchen manager for seven years and takes pride in delicious meals that cost a mere .76 cents per plate. They, too, are free of charge. As well as meals, groceries and clothing, St. Vincent’s offers something intangible — fellowship. People arrive early to mingle before lunch, including Marco, who obliges when asked to pose for a photo.

Sister of Providence Mary Bernadette lends a helping hand in the kitchen every Tuesday and Thursday along with her new friend Sister Jeannine Coulombe, sgm, who is on sabbatical at Providence Spirituality Centre. Sr. Josephine spends Tuesdays and Fridays in the warehouse where Sr. Alda volunteers full time.

Administrator Deb Greer is a force of nature, one of two paid staff who oversees 48 volunteers; occasional and regular help.

Deb will retire in August. “Since I started here nine years ago, the number of clients has tripled. But the number of services has tripled too.” More people relied on St. Vincent’s for food in January and February than ever before — 866 people in January, 810 in February.

Major renovations will close the warehouse from mid-April to June but the lunch program will remain open. Upgrades include ductwork, a wheelchair ramp and a new freezer. Renovations will create private and public space in the warehouse. There will be new insulation, drywall and an upgraded driveway.

The St. Vincent de Paul folks raised over a hundred thousand dollars through an ambitious capital campaign. An unexpected estate gift of $155,000 was donated by a long-time supporter. Funds also come from private donors, the Sisters of Providence and the United Way.