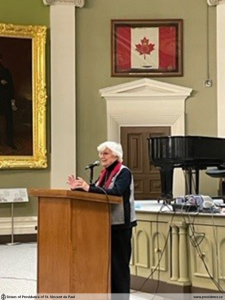 A vibrant group of individuals from various faiths, beliefs and spiritual traditions, who have been meeting monthly since the 150th Anniversary of Canada, held their annual potluck – the 1st still in the pandemic – in Memorial Hall at the historic City Hall on November 29.  Each year this Kingston Interfaith Community opens to the wider Kingston community in this way.  About 100 folks came to enjoy diverse food and music as we learned about each other beliefs and customs. The theme we explored this year was “Peace.”  The evening was facilitated by the President, Bridget Doherty.

Let me give you some of the highlights:

Dr. Mohamed Bayoumi, a Muslim, said that the word, “Islam” itself means “Peace.”  Interestingly, he spoke of Hans Kung, a Catholic theologian, who said in 1996 that there will be “No peace until there is peace among the world religions” and every race.  Peace cannot take place without Justice.  Justice is at its very core.

Wendy Luella Perkins mentioned the 8 principles to which the Unitarians covenant and led us in two of her own beautiful songs, one being, “Peace is not an idea; it’s an action.  Peace is a verb; not a noun.”

The Sufi presenter put us through an interesting exercise:  We each paired with someone we didn’t know and looked intently into that person’s eyes and s/he into ours, inviting us in silence to see each other’s ancestors and future.  Quite an experience!

Zully Hemani of the Ismaili religion brought a little 6-year old girl to the Podium with him as she recited a daily prayer in the language of her religion so devoutly.  He reminded us, “Once we lived oceans apart; now, we live across the street from each other.”

The Hindu man, born in Kenya calls Kingston home now, spoke of how his religion preaches and practices the principles of peace and nonviolence, giving Mahatma Gandhi as their prime example.

The B ’Hai religion founded in 1863 promulgates oneness and disarmament.  When thoughts of war come, think thoughts of peace.

The Quakers, radical pacificists, called the Society of Friends, don’t even buy things from areas that are in conflict. Their founder George Fox was asked by a young convert, “How long can I carry my sword?” answered, “Until you can’t.”  Then, Kate Johnson invited into one minute of Quaker silence.

Not to be outdone, the Buddhists taught us that we can’t be angry and at peace at the same time, and facilitated a three-minute silent meditation of conscious breathing.  For Peace begins from Within.

Hladini Wilson and Paramita Jarvis spoke of the Sri Chinmoy’s mission of inner and outer peace and how with no judgment, through their daily meditation, the heart connects with all, promoting a flood of love in the world for world harmony. They also spoke quite enthusiastically about their experiences when they were young of the Peace Runs.

So, who represented the Christians?  I was asked to, and my presentation is attached. It concluded with the singing of “Make Me a Channel of your Peace,” accompanied with guitar played by Ann Boniferro.  Sister Jeannette Filthaut added her beautiful voice at the podium as all joined in.

To end the evening rather paradoxically, Padre Dwayne Bos, representing the military chaplains, stated that, although soldiers are trained to kill, chaplains are not.  They carry no weapons even in war zones.  Achieving peace by force is not ideal, chaplains can be signs of the ideal of “beating swords into ploughshares.”

It was a great evening of friendship and learning.  After listening to the various religious/spiritual presentations, I was keenly aware that each has a strong component of peace leading to a call for unity among all peoples and with creation.  It reminded me of Jesus’ earnest prayer for unity to the Father, “…that all may be one.”  May it be so. 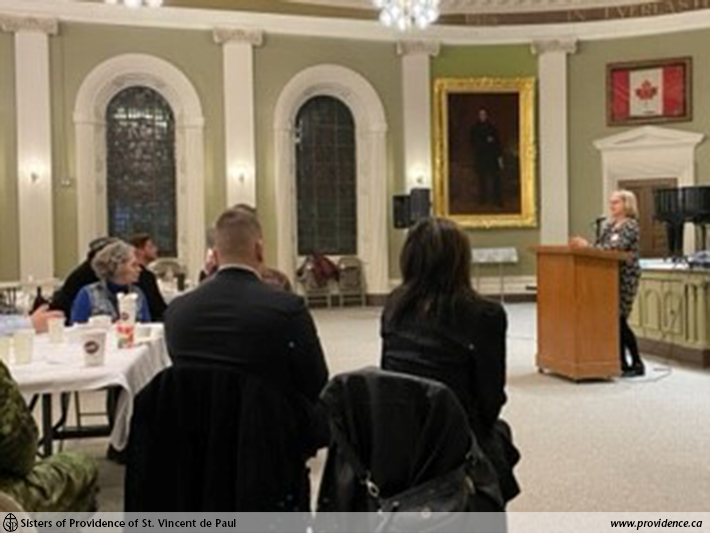