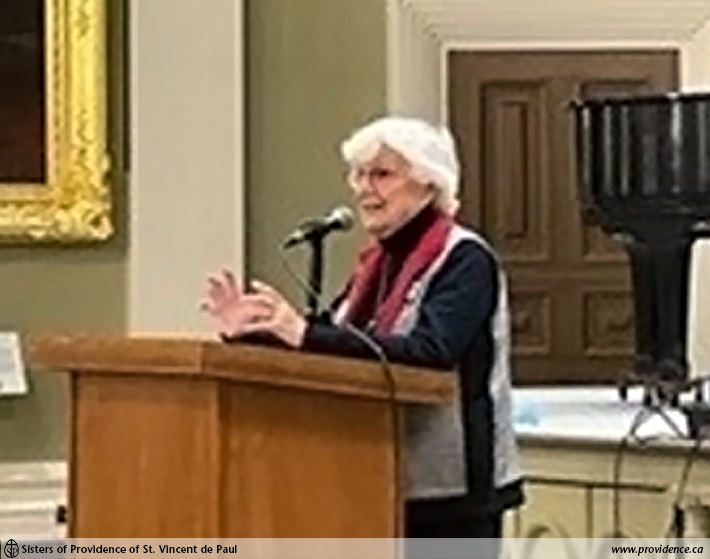 The Kingston Interfaith Community held a potluck supper on November 29, and Sister Pauline Lally spoke to the group as a Christian member of the interfaith group. The theme for the evening was “Peace” which Sister Pauline referenced frequently in her speech below.

Once when a non-Catholic friend of mine attended Mass with me, he remarked how often he heard the word, “Peace” used in the liturgy.  So, Peace – gift of the Spirit – is important to us.  We even have a wonderful gesture called the Greeting of Peace; the kids love this part of the Mass, shaking hands and waving to those nearby.  We do this before receiving communion because we need to be at peace with one another, holding no animosities or grudges before receiving the sacred host, the Prince of Peace himself.

In the Bible, which is our holy book – actually it’s a library of books, 73 to be exact, both from the Hebrew and Christian Scriptures – 46 from the Hebrew writings and 27 from the Christian Gospels according to Saints Matthew, Mark, Luke and John about the life, teachings, miracles, death and resurrection of Jesus, as well as the Acts of the Apostles about how the Jesus movement continued and Christianity began.  In addition, the many letters or epistles of Saints Paul, John, Peter, and James to the developing Christian communities are also included.

Many of these letters to the early churches begin with, “Grace to you and peace from God the Father and from the Lord Jesus Christ.”

In one of these epistles Saint Paul writing to the Romans (10: 14-15), quoting from the Jewish prophet Isaiah, writes “How beautiful on the mountains are the feet of those who bring good news, that proclaim peace, who bring good tidings, who proclaim salvation.”  (Is. 52:7) This reminds me of the angels on the first Christmas who announced to the shepherds on the hills outside of Bethlehem the birth of Jesus, the incarnate Son of God, as they sang, “Glory to God in the highest and on earth peace to people of good will.  Alleluia!”  Incidentally we Catholics sing this song at Mass each Sunday, except the Sundays in Lent.

In our society injustices, poverty, violence, slavery, and inequality render true peace impossible. The more issues we solve, the more we can live in peace. But sometimes we seek peace without being aware of or without attempting to try to solve these problems.   This kind of peace is always temporary.  Even those of us advocating for change will always have a cause that is never complete. The peace that the world gives is dubious since it depends totally on our abilities, and circumstances. The peace God offers transcends our circumstances and is forever.  Jesus gives his very own peace to his disciples and to us and tells us not to be afraid. The peace of Christ is power.  It is God’s power to hold our wildest fears at bay.  It is mercy in the face of our sins.  It is life in the aspect of death. “This peace that is mine I give to you” is like “I say it and I mean it.” So do not be afraid.

However, as you well know, we Christians have not always lived according to the Gospel of Jesus, the Gospel of Peace.  The Crusades are an example of misconstrued peace, of unspeakable violence, a horrific black mark on our history.

Yet, amid the crusades lived a humble Christian man from Assisi.  He did not join the crusades.  Instead, he chose to meet with the Muslim Sultan in the name of peace.  His name was Francis.  He wrote a peace prayer that many musicians over the years have put to music.  In closing, we’d like to sing that prayer with the rendition by a South African, Sebastian Temple, called “Make Me A Channel of Your Peace.”  Please join in as you feel comfortable. 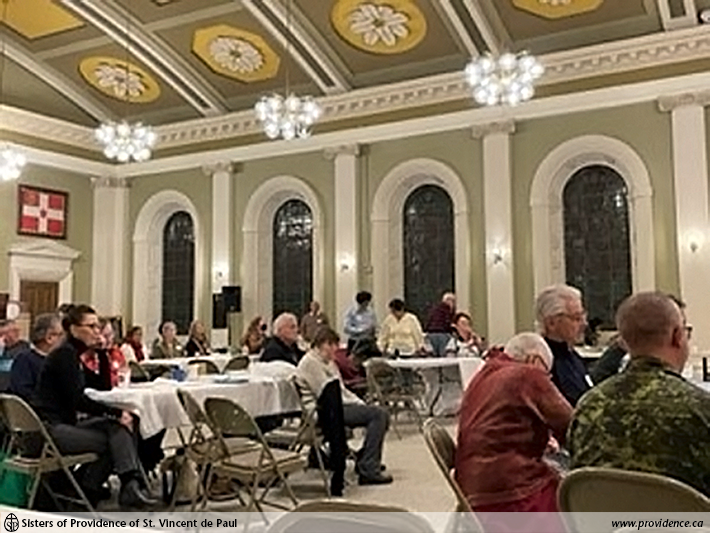