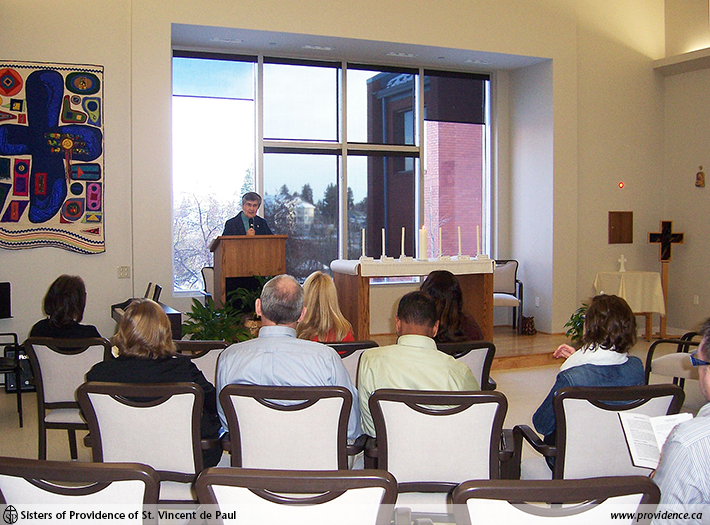 A Jubilee Year of Mercy proclaimed by Pope Francis in 2015 has just come to a close with the closing of the Holy Door of Mercy on November 20th. But MERCY is ongoing as reflected in today’s scripture of Matthew 25, and that is very evident in the compassionate service of the dedicated staff and volunteers who have served and are presently serving here at St. Mary’s Hospital in Camrose, AB.

Nearly 100 years ago in 1920 Father Schnitzler of Camrose applied to Providence Motherhouse in Kingston Ontario for some sisters, because these same sisters were already operating a hospital in Daysland, AB since 1908. However, it was not until his successor Father Patrick Harrington came to Camrose in 1922 that these initial negotiations were brought into being by one of our great western pioneer sisters – Sister Mary Angel Guardian. She was commissioned to plan and supervise the building of a new hospital in Camrose as she had already done in Daysland, AB (1908) and in Moose Jaw, SK (1912). In reading the necrology of Sister Mary Angel Guardian, a woman of 31, who entered the community in 1889 from a small town in Ontario – Brewer’s Mills –  we experience a woman of vision, great courage, determination and definitely a spirit of trust in Providence. That same spirit of trust in Providence, determination, courage and vision has been carried forward here at St. Mary’s by many Sisters of Providence of St. Vincent de Paul, the doctors, nursing staff, all administrative, maintenance, housekeeping, kitchen, laundry staff, board members and countless volunteers.

St. Mary’s Hospital, according to notes of Sister M. Angel Guardian, written February 1929, was “built on a large block of land on Normal Hill, a site that seemed very appropriate, with sun, air and quiet surroundings. The retiring Superior at Daysland had $11,000.00 in the bank to begin the hospital.” Trust in Providence! On October 19, 1924 the completed 50 bed hospital was opened with Sister Mary Clotilda Brady as Superior and a staff of 5 Sisters: Sisters Mary Alban Hawkins, Matilda Marshall, Mary Gerald Murphy, Mary Cleophas Raby and Mary Emerita Barry. In the first year of opening 800 patients were treated. “Many souls have been saved here, preparation for death and infants baptized, it also brought a good spirit to the town of better relations between the different denominations. Our blessed Lady certainly looked after all as many blessings attended the work, giving glory to God.” Through the years many people from Camrose and surrounding areas have been blessed to have experienced compassionate care and hope through their short or long term affiliation or residency with St. Mary’s Hospital.

I first met Father Harrington in the 1950s during some of our family visits from Saskatchewan to Camrose visiting my sister Marianne and her husband Norman MacKenzie, whose six children were born at St. Mary’s Hospital, one of them requiring a complete blood transfusion. When I had graduated from High School I came to work in Camrose in 1961 and at 18 had my first breast biopsy at St. Mary’s Hospital. I remember Sister Irene Forrester, then a lab technician and later our General Superior, coming to take my blood. Her beautiful smile and joyful spirit was contagious. That has been the smile and spirit on many of the staff who have served here at St. Mary’s. In 1961 having spoken with Father Harrington and another priest I took the courageous step to speak with the sisters at the hospital to see if I was called to consider religious life. Sister Mary Clare, the hospital administrator and superior at the time, invited me to come for lunch because Mother Lenore, the Assistant to the General Superior, was coming for visitation.

Well lunch in those days, meant that I ate in a small room by myself and then met with the sisters after lunch. I did share some tea with all of the sisters in the little cottage once located beside the old hospital.  Some of you may know the movie “Six Degrees of Separation”. 55 years ago September 1961 I entered the Sisters of Providence in Kingston, meeting one of the original sisters who served at St. Mary’s – Sister Mary Alban Hawkins, who was then serving on the General Council. She was a most compassionate woman and I can imagine she brought that same compassion to the nurses she taught at the training school for nurses established at St. Mary’s hospital in November 1924.

In 1935 the sisters discontinued the nursing school until they could enlarge the hospital. So in 1948 a new wing was built providing fifty-two additional beds, eighteen bassinets and three modern operating units. The laundry building began in September 1961. In May, 1969 a new wing was opened, including a new kitchen, cafeteria and fifteen beds, making 117 beds in all. Well, 1969, after my final vows, was when I returned to Camrose to teach at Our Lady of Mt. Pleasant School and to live with the nursing sisters on the 2nd floor of the old 1924 hospital wing. It was my privilege from 1969 to 1981 to teach many of the children of the staff of St. Mary’s Hospital. Through those years I grew in my admiration of hospital staff and St. Mary’s and Camrose has always been like a second home. I have many stories in my treasure box of compassionate spirit that I witnessed through the hospital staff, along with many creative endeavours, welcoming ecumenical presence, attention to the needs of people in crisis mode, gentle presence with loved ones grieving a loss and so many more.

I also have many fun experiences with sisters and staff in those 10 years I was in Camrose. I remember Sister Mary Stephanie in her rubber boots at the end of the day out tending the garden. She also created some delicious dandelion wine she shared with the sisters and staff. I remember Ron Bailey who worked with Sister Mary Gervase in Purchasing coming in at odd hours to assist in attending to some mechanical breakdown. I remember Sister Rose Bekar, administrator and superior, dressing up to attend one of Fr. Ray Guimond’s youth-organized barn dances. I remember Sister Mary Perpetua who served in the surgery department, coming to check that I had arrived safely home from evening meetings. I remember the Board dinners that were served with the fine china kept in the glass cupboard. One of Sister Sandra’s memories is the huge crash that was picked up by the hospital microphone. As it was investigated, they discovered Sisters Sheila Brady, Reinalda Kloosterman and Sandra Shannon had broken much of this fine china as they were attempting to empty the cupboards.

Sister Sandra also shared an experience of Fr. Len Gartner bringing into the reception desk two little chicks for the sisters. The microphone was on, so the peeping was heard throughout the whole hospital. These chicks were given to a staff member who fattened them and gave them back to the sisters. Sandra also shared her memory of a man dying who didn’t want to see anyone except Sister Mary Hamilton. She was his only visitor till he died at St. Mary’s.

I was fortunate to be visiting in Camrose when the old hospital was being demolished to make way for the present facility that officially opened June 23, 1989. In reviewing stories in our Providence Pages one of my former students, Keith Leibel, son of Sebastian Leibel, from maintenance received the Sisters of Providence award for his dedicated service. Many of you are deserving of receiving this award and so my prayer for you is that you may continue to serve with compassion, trusting in Providence and walking forward in Hope.

Share story from Joan Chittister re embracing the mysteries of life – if not with “joy,” at least with trust.