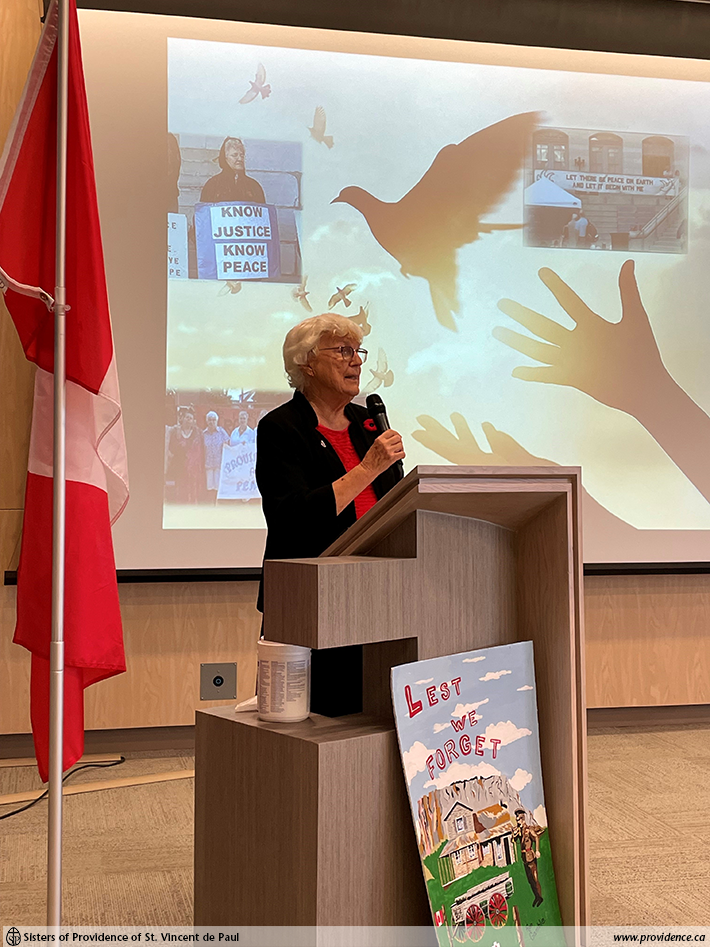 Sister Pauline Lally was invited to speak at the Remembrance Day ceremony at Providence Care Hospital, where she spoke of the lives lost in WWI and many wars since that we remember on November 11. As a longtime justice and peace advocate, she also described her hope for a world where Peace could replace War and the tragedies of war could be averted.

Thank you for the honour of inviting me to share my reflections on Remembrance Day 2022 with you.

I was asked to share today because of my affiliation with PeaceQuest, an initiative launched during the four-year 100th anniversary of World War I remembering the horrors of war and dedicating ourselves to the work of peace.

Is this a bit of a contradiction – a so-called “peacenik” speaking at Remembrance Day?

Well, you know, Providence, the name of this hospital as well as of the congregation to which I belong, is that Name of God which speaks, not only of God’s Loving Care, but it is that Name of God that can hold the polarities, the movements of life in creative tension, seeking their resolution on a higher plane.  This allows for a new way of seeing to emerge that reconciles the opposites by transcending them and bringing them into meaning and eventually harmony.  (And incidentally, as you know, for beautiful harmony everyone isn’t, by any means, singing the same note.)

The first Remembrance Day after World War I was held to honour the lives of those who fought and died in that Great War, to which it is often referred, “The War to end All Wars.” If, only …

Today we have a broader perspective of Remembrance Day.  Sadly we remember other wars as well in which our military was involved, and we remember our veterans.  But we also remember all loss of life, including the environment, our allies and even those on the other side. “Our broken hearts are connected to every broken heart that has known pain from the beginning of time.” (Brene Brown.)

In Spanish to remember is “recorder” which literally means “to pass through the heart again.”  And that’s what we do every Remembrance Day.  We remember the raw horror and sheer madness of war and all the losses, and it passes through our communal heart again.  It’s a somber day and often the weather confirms to that.

With sober consideration we grieve all those losses once again and we honour all the women and men of the military – especially the veterans in their blue blazers and berets.

But we don’t stop there. The dead, our soldiers, deserve better.

Remembrance Day impels us to act, to commit ourselves to the work of peace and nonviolence – before there is no world to save.  We do not give into fear. We unburden ourselves of hatreds.  We become aware of uncritical mythologies in our textbooks, stories and movies that glorify war.  War is not to be glorified.  Just ask any veteran.

This is how we honour our veterans and those who lost their lives in war.  We work for peace and nonviolence in our own lives.

Isn’t it interesting and most telling, though not surprising, that those who fought in wars tend to be the ones most conscious not only of the tragedy of war; but they are also the ones most concerned about peace?  Even Dwight Eisenhower, a General during WWII, who became the 34th President of the United States, said, “Every gun that is made, every warship launched, every rocket fired signifies, in the final sense, a theft from those who hunger, those who are cold and not clothed.”

We live in a military town.  Kingston is home to the Canadian Forces Base and RMC, a Royal Military College that prepares officer-cadets for a career in the profession of arms, defense issues and combat. So, it is not easy to present another point of view in this city.

Well then, can we imagine a world without war, a planet that isn’t dying, a Princess Street with no homeless beggars, a hospital with no shortages?

I’ve often imagined wouldn’t it be wonderful if RMC could one day be called RPC – Royal Peace College -where cadets are trained in and committed to the skills of negotiation and diplomacy, nonviolence and peace-keeping, skills of conflict management and anger-control?

This dream is a challenge based on truth and justice and reconciliation, not lies and injustice and vengeance.  For years we have heard chanted on so many people’s lips- from popes to labour leaders, from grandmothers to children: “No Justice.  No Peace.”  And it is sooooo true!  No justice; no peace.  It is injustices that provoke war. Peace is an enterprise and the result of justice, not vengeance.

We must change our way of thinking and acting.  Our young people involved in the environmental movement are telling us this repeatedly.  The psalmist says, “If you hear God’s voice, harden not your hearts.”  And God’s voice comes to us in a variety of ways.

Once, African Bishop Desmond Tutu was asked, “What is the greatest evil in the world?”  He answered, “The greatest evil in our world today is for good people to do nothing.”  If we remain silent, the arms race will continue absorbing money from food, housing, health care, and the integrity of creation.

This Remembrance Day let us show respect to our war dead and veterans with the Providence of God by holding the polarities and movements of life – war and peace – in creative tension, seeking resolution on a higher plane by allowing a new way of seeing to emerge. That new way reconciles the opposites, by transcending them creatively with hope into meaning and eventually harmony.

This day of remembrance always renews my commitment to work for peace, justice, decency, and respect for all within the Divine Milieu in which we live and move and find our meaning.

“We must be the change we wish to see in our world.” (Ghandi)