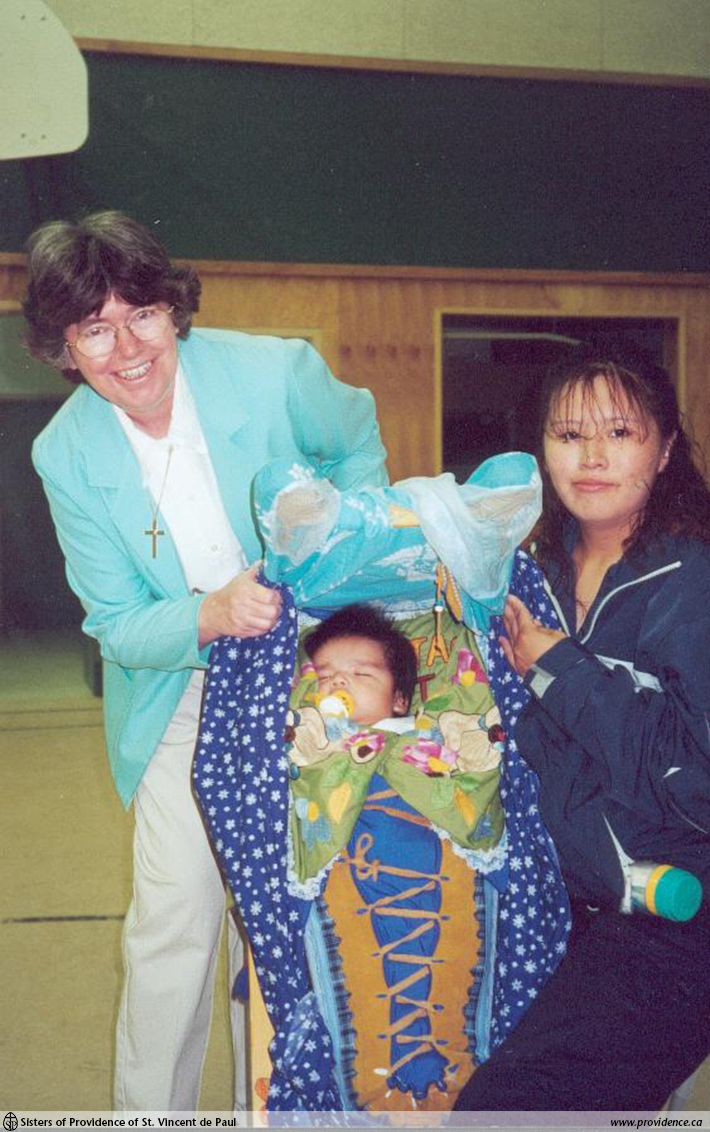 Sr. Una Byrne at the Baptism of a Neskantaga First Nation child. The child is in a tikinagan, a traditional cradle board that the mother carries on her back.

The smell of smoke these mornings reminds us of the ever-present danger of forest fires in the north. Although Moosonee is far from the fires right now, some of the communities in our diocese are being affected – from James Bay west to the communities north of Thunder Bay. All except one of these communities are accessible only by air or by ice road in the winter. This makes travel difficult, time consuming and expensive.

Being responsible for Religious Education, Faith Development and Leadership training in the diocese, means that I do a lot of travelling. Based in Moosonee, where I also work as part time Pastoral Assistant, my travel takes me mostly into three of the Cree Reserves up the coast of James Bay. I also travel to the western part of the diocese where a lay pastoral worker serves the small Ojibway communities.

In these small communities, almost all the people are nominally Catholic. In two of the communities in James Bay, we are allowed to have Religious Education in the school. Part of my job is to train and provide support and resources for the native catechists teaching in these schools, a goal we’ve been working on for some time. When I first arrived here, the diocese was hiring mostly retired teachers from the south. Part of our enabling the First Nations to take the role of passing on their faith, has been to ask local people do more of this kind of work in the parish. This is a change for the people, who were used to having Sisters and Oblate Brothers to do all that was needed in the church. Now I try to challenge them to do the Baptismal Preparation, to prepare their young couples for marriage and their children for the Sacraments of Initiation, to preside at the Sunday Celebration of the Word and to serve their own people as Special Ministers of Communion. This means giving them training and support. The people have a hard time adjusting to this, especially committing themselves to a ministry over the long term. It is also hard for them to take on these roles in small communities where everyone knows their past and present struggles, where they have to cope with inadequate housing and many social problems. I admire the humility and simplicity that allows them to agree to take on leadership roles in spite of all these problems. It is amazing how they can pick up and go on, even after a terrible tragedy!

A lay pastoral worker who visits them once a month serves the Ojibway people in the western part of our diocese. He , his wife and children live in Pickle Lake. We do not have a priest for this area and it takes two days to get there from Moosonee. The Bishop borrows priests from the diocese of Thunder Bay to go into these communities a few times a year and he himself travels there a couple of times a year. I try to get into these communities to do some in-service work with the pastoral worker and to work with the people whenever I can. It is hard for the people to understand why they cannot have a priest and why they so rarely have Mass. Even in James Bay where we have two elderly priests, none of the communities have Mass every Sunday. One community has Mass only once a month. This is very sad and frustrating especially as these people are already deprived in so many other ways.

I see great needs in the north. As I begin my 10th year in James Bay and my 17th in the north, I still find it very difficult to live alone without any other Sisters. But I believe that God is calling me to this mission and that He will give me the grace and the health to continue.