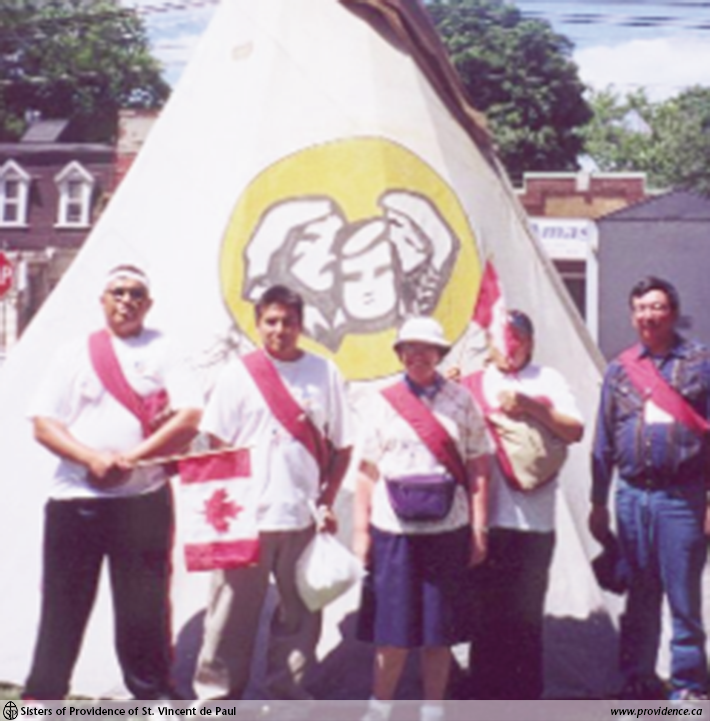 The Moosonee group, including Sister Una Byrne, at the Native parish in Toronto by the teepee.

World Youth Day, who can describe such a experience? It is best described by the Holy Father’s dream, as expressed in his Evening Vigil, that it would be “a powerful moment in which the young people of the world could meet Christ, who is eternally young, and could learn from him how to be bearers of the Gospel to other young people.”

The 54 pilgrims from James Bay who travelled to Toronto will never forget this wonderful encounter. The trip itself was the culmination of months of preparation. In each community there was a World Youth Day committee who worked hard getting the word out, preparing people spiritually and finally raising money.

The biggest expense for the 30 young people from Attawapiskat and the 18 from Fort Albany was transportation. Because these two communities are isolated, having no roads or train into the communities, the only way out is by air. After much investigation it was realized that the most economical way to do this was for them to charter planes to take them south to where they could get a train to Toronto.

Even this was extremely expensive and in spite of their efforts to raise money the people would never have had enough had it not been for the generous donation of the Catholic Principals of Ontario and of the many Sisters and friends who contributed by their purchases of T-shirts and mugs and by their generous donations to the cause. It was this help that enabled it all to happen and the people are very grateful for this.

Thus it was that Attawapiskat chartered a plane to Timmins and Fort Albany to Cochrane. There they joined the Moosonee group who had come down by train to Cochrane. After a night in Timmins and Cochrane we all left early Monday morning, accompanied by our Bishop, Vincent Cadieux omi, on the 11-hour train ride to Toronto.

Joining us were the pilgrims from the Ontario dioceses of Timmins and Hearst and some young people from Chile who had spent the “Days in the Diocese” in Timmins. We filled four coaches on the Ontario Northlander! With such a multicultural group it was not surprising that on the trip we prayed the rosary and sang hymns in Spanish, Cree, French and English.

The week in Toronto was exhilarating, inspiring and exhausting. The enthusiasm of so many young people, their reverence and devotion at prayer and their joy and love in the presence of the Holy Father was awesome. When the Holy Father came on Thursday some of the bigger boys in our group lifted the girls on their shoulders so they could get a better look at him. After seeing him there were many tears and hugs, and then our group joined hands in a circle of prayer to thank God for what had happened and for the people who helped them to get to Toronto to see the Pope.

The first time the cross was brought forward was another emotional moment. Everyone was trying to touch it as it passed through the crowd and members of our group commented, “That cross was in our community! We carried it on the skidoos through the bush. We touched it and our kids touched it.”

The Way of the Cross was a very significant event for all of us. Most of us viewed it with the huge crowd down University Avenue. Some of our young people knew little about the Stations and commented on how now they “know better about Jesus and how he died on the cross for us and about what the Way of the Cross means.” A young man expressed how he “felt nice inside” and how it was helping him in his struggle “to stop booze and drugs.”

Since we have returned the group in Attawapiskat told their pastor they want to build an outdoor Way of the Cross in the bush outside their community and teach it to the young people in the community.

One afternoon we went to the Native Parish at St. Ann’s Church in downtown Toronto to attend a workshop on native spirituality. Our young people appreciated meeting other Native People from different parts of Canada.

Each day we attended the catechetical sessions. The one with Bishop Durocher was a big hit. The liturgies planned by the Net Ministries of Canada were a good exposure to the possibilities in celebrating the Eucharist and showed us how beautifully young people could use their creativity in planning the liturgy.

The Attawapiskat group had a big banner painted by a young man from their community and on it they collected signatures from people from all over the world. As one person said: “One thing I liked about World Youth Day is all the different nations became one big happy family as Christ came out from their hearts and it shows through their attitudes and their faces express Christ is walking among us.”

On the buses and subway, on the streets, there was joy and life and a sense of belonging together. One young man expresses it as, “It was like Heaven is here. It is a taste of what is to come. Everyone wants to gather together despite their aching and tired bodies.”

And there were tired and aching bodies by the time we walked to Downsview on Saturday for the vigil. But the vigil itself with the lighting of candles, the prayers, the songs and the presence of the Holy Father gave another wonderful experience to all. Two of our young people, a young woman from Attawapiskat and a young man from Fort Albany were part of the group of aboriginal youth sitting on the stage with the Holy Father that night.

Although we hardly slept, got soaked, and had a terrible time getting to the washroom and finding some food, it was all forgotten in the Mass that followed on Sunday morning. Again the presence of the Holy Father and so many young people praising God lifted our spirits and kept us going.

Throughout all this the volunteers who looked after us were so generous and kind. In particular the people at the school where we stayed each night went out of their way to accommodate us. These words from one pilgrim say it: “I cannot express God’s presence but I will name some pointers: hospitality, courteous, generous, security, humour, happy, laughing, crying, joy, sing praises, talking etc.”

These volunteers, including the principal of the school, were a great example to the young people of living out their faith in service to others.

As we reflect on this experience and make plans for the coming year we hope that these young people who attended World Youth Day will form a nucleus in each parish for the development of a youth ministry. When we had the first meeting of the diocesan World Youth Day committee, one of the hopes that kept coming forward from the group was that the young people would see the Church as their home that they would really feel welcome and see that they have a role in building up the Reign of God. We continue with this hope inspired by the words of the Holy Father who told the young people to “answer the Lord with strong and generous hearts! He is counting on you.”

We will continue to remember and pray for all those who helped bring us to this point by their kind and generous support. May God bless you all. 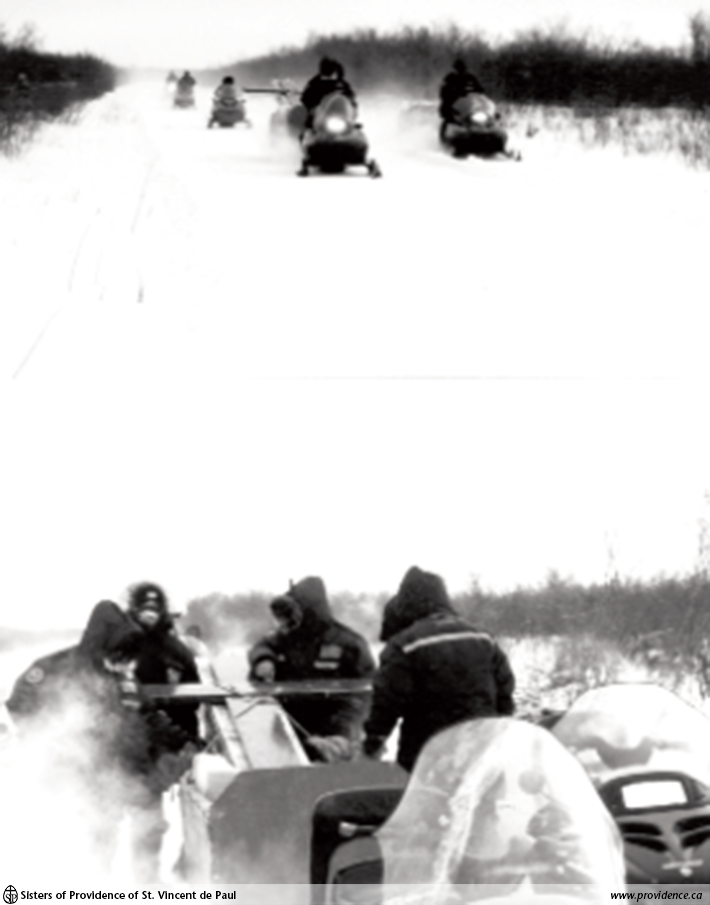 The World Youth Day Cross is carried in the North by skidoo.